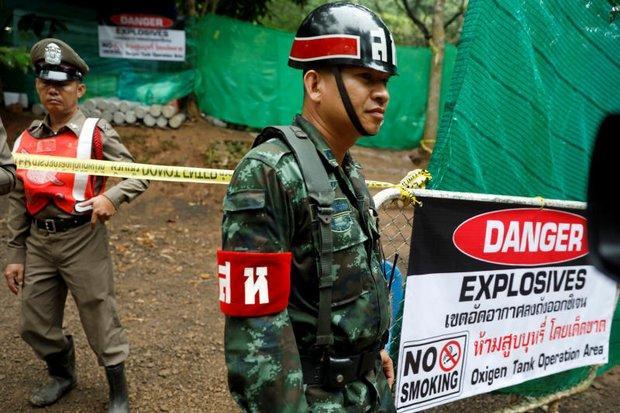 Military (centre) and civilian police closed off all access to the Tham Luang cave Sunday morning and ordered all "unnecessary personnel" including media to move 2km back as final rescue preparations began. (Reuters photo)

Rescuers have made final preparations to bring the 12 trapped children and their football coach out of the Tham Luang caves.

"Today is D-day. The boys are ready to face any challenges," rescue chief Narongsak Osottanakorn told reporters who were cleared from the cave entrance at mid-morning on Sunday.

"We are at peak readiness."

He added, "Continue to be amazed by the bravery, resilience & tenacity of kids & diving team in Thailand. Human character at its best."

D-Day (noun): a date on which something important is expected to happen (From the name given to 6 June 1944, the day on which the British, US and other armies landed on the beaches of northern France in the Second World War) -

extraction : the act or process of removing or obtaining something from something else - การถอน, การดึงออก

readiness : a state of being ready and able to deal with what might or will happen - ความพร้อม

refuge : a place where you go to protect yourself from something dangerous or threatening - ที่ลี้ภัย ที่หลบภัย

resilience : the ability of people or things to feel better quickly after something unpleasant, such as shock, injury, etc - ความสามารถในการกลับสู่สภาพเดิม

retreat : to move back or away - ถอยกลับ

submarine : a ship that can travel underwater - เรือดำน้ำ

tenacity : very determined behaviour and is not willing to stop when you are trying to achieve something - ความดื้อรั้น, ความดื้อดึง