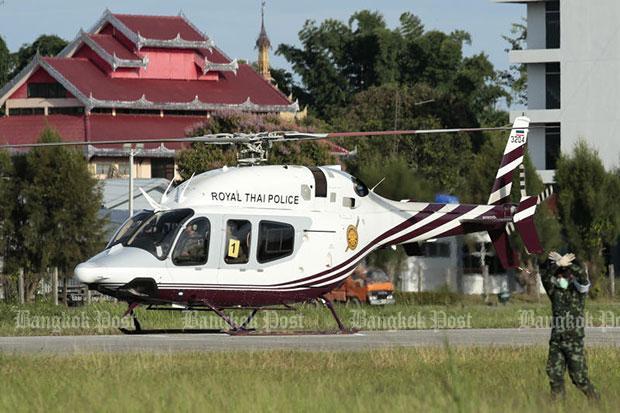 A Royal Thai Police helicopter airlifts the fifth boy from a makeshift pad in Mae Sai district to Wing 416 in Muang district in Chiang Rai on Monday. (Photo by Patipat Janthong)

Four more boys have been airlifted to a Chiang Rai hospital after they were safely brought out of the Tham Luang cave by the same team of elite divers who managed to rescue the first four boys on Sunday, according to the Thai Navy Seals.

The boys brought out of the dark, winding cave on Monday are "safe and conscious," he told the media.

The Seals posted a count on their Facebook page, concluding with "Two days, eight boars", a reference to the name of the boys' football team.

They were taken to Chiang Rai Prachanukroh Hospital where their four teammates rescued on Sunday had been tested and waiting for an all-clear.

Monday's operation began at 11am and took nine hours, two fewer than Sunday, with rescuers helped by the experience they've accumulated, Narongsak Osotthanakorn told a news conference punctuated with rounds of applause.

"We have more operating personnel. And we have more expertise than yesterday," he said.

Rescuing the remaining five people, including the boys' 25-year-old soccer coach, could take more than one operation, he said.

Authorities have not revealed at this stage when the rescue operation would resume for the remaining four boys and their coach, who have been trapped in the cave since June 23.

The premier arrived late Friday at the mouth of Tham Luang cave. Spokesmen said the purpose of the visit was "to give moral support to the rescue team members".

He later visited the eight rescued boys at the Chiang Rai Prachanukroh Hospital.

Earlier in the day, the prime minister had visited Phuket to check on the search operation of tourists who were missing after a boat capsized off the resort island's coast on Thursday.

Click "play" to listen to Four more boys safely out and "Download" to keep this file for educational purpose.

capsize : (of a boat or other object) to turn over in the water - คว่ำ, พลิกคว่ำ

expertise : a high level of knowledge or skill - ทักษะความรู้, ความคิดเห็นของผู้เชี่ยวชาญ

punctuate : to interrupt something for time to time - ขัดจังหวะ