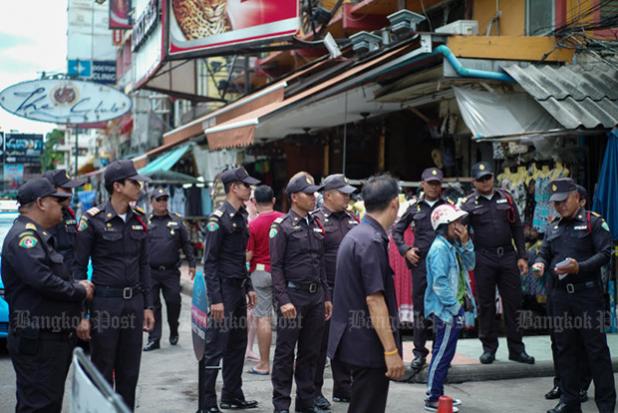 Hundreds of street vendors in the capital's bustling backpacker district of Khao San Road ignored an announced ban and orders to leave, carrying on business as usual on Wednesday.

The Bangkok Metropolitan Administration imposed a ban on all commercial activities on the sidewalks of the road which for decades has been filled with food hawkers, shops and stalls selling bags, wigs and hippy-era clothing, surrounded by bars, restaurants, tattoo parlours and cheap hostels.

The vendors were ordered to move to a smaller space on the road where stalls can only operate between 6pm and midnight, part of a move to "create order and return the footpath to the people", City Hall said.

But many vendors set up their stalls as usual.

"We will not move today," said Natta Potina, 43, who has been a street hawker for more than 30 years. "Our stalls are an important part of this street's identity."

"Officials can do whatever they need to do," said Kotchapan Fungfuang, 50, who has run a clothing stall in the area for more than 20 years.

"We do not want confrontation so we will take down names of those who do not cooperate and we will charge them accordingly," Pornlert Penpas, assistant to the Phra Nakhon District director where Khao San Road is located, told Reuters.

"Those who failed to cooperate will be banned from doing business here in the future."

"Now, the government won't even listen to us."

The regulations are part of wider effort by the military government, which came to power in a 2014 coup, to impose order in the city, famous for its bars and raunchy night life.

Many tourists visiting Khao San said they do not understand why new rules were needed.

"This street is known for the night market and that's why the backpackers come. So it won't be the same," said Eve Caffrey, 23, a tourist from Ireland.

"The shops are part of the atmosphere and attraction of the street," said Koen Nevins, 49, a tourist from Belgium. "It would be a shame if all this is gone."

Click "play" to listen to Vendors ignore ban on road stalls on Khao San and "Download" to keep this file for educational purpose.