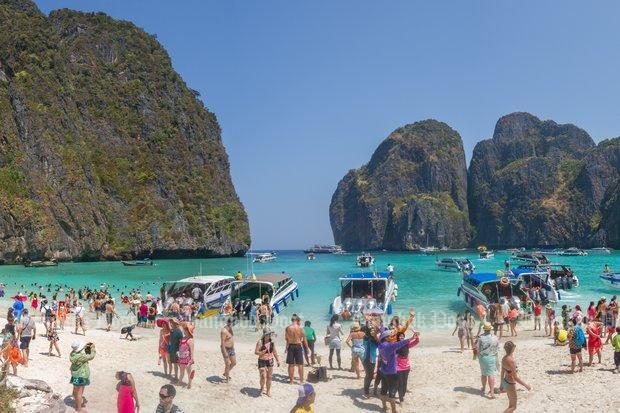 The closure of the famous tourist site, Maya Bay in Krabi, to visitors has been extended to allow the damaged marine ecosystem to fully recover, drawing immediate protests from tour operators.

An announcement was made on Sept 28 by Thanya Nethithammakul, the head of the DNP, to close the bay and nearby La Dalam beach indefinitely from Oct 1 onward, until the marine and coastal resources and environment return to normal.

'We need at least a year or even up to two years' for rehabilitation,' said the director of the Office of National Parks.

Click "play" to listen to Maya Bay closure upsets tour firms and "Download" to keep this file for educational purpose.

coral (noun): a hard substance that is red, pink or white in colour, and that forms on the bottom of the sea from the bones of very small creatures - หินปะการัง

indefinitely : for a period of time with no fixed end - ไม่มีข้อกำหนด

rehabilitation : the process of returning someone or something to a good or healthy condition, state or way of living - การทำให้กลับสู่สภาพเดิม, การทำให้กลับมาดีเหมือนเดิม

renowned (adj): famous and admired for a special quality, skill or achievement - ที่มีชื่อเสียง