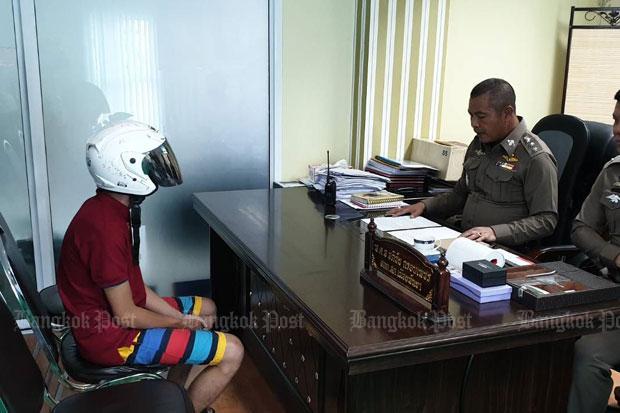 The district police chief said on Wednesday that Jetpinit Nonseerat, from Khon Kaen province, was arrested at his room in tambon Nong Kham of Si Racha district.

Police identified him from camera footage as the man who masturbated in front of a group of female receptionists in front of the Season Chill restaurant on Pattaya 3 Road late on Monday night.

On Monday night he had ridden a stolen red Yamaha Fino motorbike to the restaurant, the police said. The licence plates had been removed.

Mr Jetpinit told police he worked as a salesman for an electrical appliances store and had a girlfriend. He had been treated previously for mental illness, in Khon Kaen, but had lately stopped taking his medicine.

He said he had no intention to rape anyone and he stole the motorcycle from a nearby apartment building especially for the Monday night act.

Police fined him 5,000 baht for public nudity and theft.

Click "play" to listen to Pattaya masturbator uses stolen bike in latest show and "Download" to keep this file for educational purpose.

licence plate : a flat piece of metal or plastic on the front and back of a vehicle that shows its license number - แผ่นป้ายทะเบียนรถยนต์

nudity : the condition of not wearing clothes, or of not covering a part of the body that is traditionally covered when you are in public - การเปลือยกาย