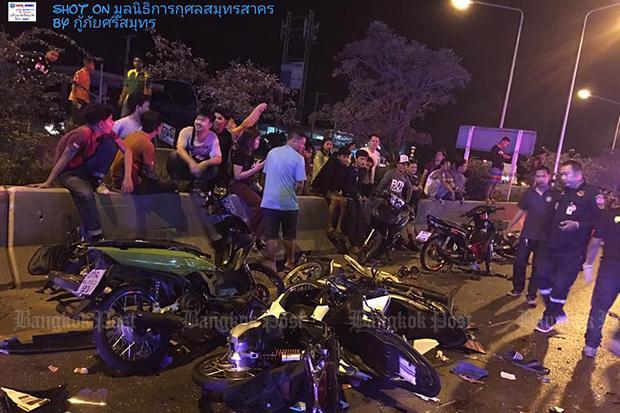 One street racer died and 18 others were injured in a collision during a street race in Samut Sakhon in the early hours on Sunday.

Rescue volunteers found 15 damaged motorbikes piled up on Rama II Road with 19 racers lying on the street, one of them dying at the scene, after the incident was reported at 1.15am.

Police identified the dead biker as Jeerasak Chanprieng, 20, according to INN News. The injured were sent to five hospitals in the province.

An initial investigation found that one or two motorbikes in the pack may have lost control, sending speeding bikes behind crashing to the ground.

Police have yet to press charges against them. Normally, street racers are charged for reckless driving and public disturbance.

Police believed other racers had fled the scene after the accident. All will be sought and brought in for interrogation, he said.

Click "play" to listen to Street-racing motorcycle crash kills 1, injures 18 and "Download" to keep this file for educational purpose.

disturbance : an occasion during which people behave in a noisy or violent way in a public place - ก่อความไม่สงบ หรือรบกวนประชาชน

pack (noun): a group of similar people or things, all the people who are behind the leaders in a race, competition, etc - กลุ่ม, หมู่, พวก,คณะ

volunteer (noun): someone who is not paid for the work that they do; someone who does something willingly without being required to - อาสาสมัคร