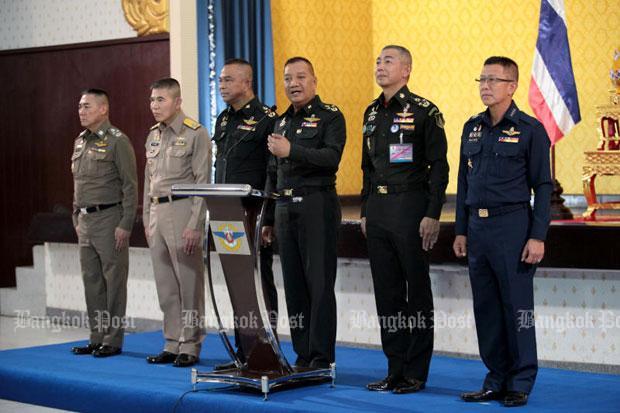 Fugitive former prime minister Thaksin Shinawatra had disrespected the high institution and failed to maintain his honour, and deserved to be stripped of his armed forces alumni awards, the military declared on Thursday.

Gen Pornpipat Benjasri, chief of defence forces, delivered the message during a news conference at the 11th Infantry Regiment in Bangkok, in the presence of the chiefs of the armed forces and police and the defence permanent secretary.

Gen Pornpipat confirmed a report that the board of the Armed Forces Academies Preparatory School alumni foundation had removed the name of Thaksin from the school's hall of fame and stripped him of his Chak Dao alumni achievement awards. Gen Pornpipat is chairman of the board.

"I believe that fellow people know the reason well and have seen it through websites and social media. One thing affects military morality and doctrine. If there is offence and unawareness of what is high and low, it is time for us to make a decision," the defence forces chief said.

"The Chak Dao Award is an award of honour. Awardees must retain their honour. If there is proof that any of them cannot do this, we must withdraw it."

The action followed the wedding reception for Paetongtarn Shinawatra, Thaksin's youngest daughter, in Hong Kong last Friday. Princess Ubolratana presided over the party. Many pictures taken at the event were posted online and went viral through social media.

Thaksin was a member of Class 10 at the preparatory school and graduated from there in 1968. He received a Chak Dao achievement award in 1991 for his contribution to economic development. He received a similar award in 2011 for management achievement.

Click "play" to listen to Army takes back Thaksin awards and "Download" to keep this file for educational purpose.

achievement : something very good and difficult that you have succeeded in doing - การบรรลุผลสำเร็จ

alumni : the former male and female students of a school, college or university - ศิษย์เก่า

honour : an award, official title, etc. given to somebody as a reward for something that they have done - เกียรติยศ, เหรียญตรา

preparatory school (noun): a school, usually a private one, that prepares students for college - โรงเรียนเตรียม

presence : the fact of being in a particular place, thing or situation - การเข้าร่วม, การมีอยู่

preside over : to lead or be in charge of - รับผิดชอบ

stripped : to take something away from someone - ถอน, ยึด

withdraw : taking or move out or back - การถอนตัวจาก