No Songkran on Khaosan Road this year | Bangkok Post: learning 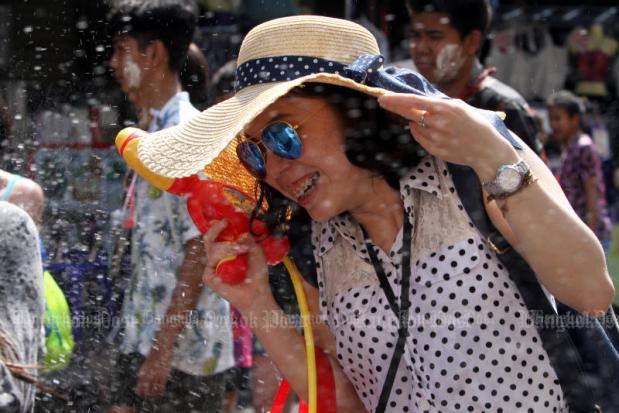 A tourist enjoys getting wet during the Songkran festival on Khaosan Road in April last year. (Photo by Apichart Jinakul)

Business operators on Khaosan Road have decided to cancel activities for Songkran this year to allow authorities to prepare the area for the coronation of His Majesty the King.

The Khaosan Business Association announced in a statement dated Tuesday and released on Wednesday the decision to scrap all activities during the Songkran festival.

Shows, merit-making ceremonies and parades will be suspended this year to allow the government and Bangkok Metropolitan Administration to improve and decorate the areas for the coronation of the King, association president Piyabutr Jiwaramonaikul said in the statement.

Khaosan Road, a popular hangout for backpackers, is part of Rattanakosin Island where all roads and buildings will be decorated for the coronation event taking place from May 4-6.

The street has gained worldwide attention for its exuberant Songkran shows and water fights for more than four decades. Songkran celebrations there were also cancelled in 2017 as the country was in the mourning period for the passing of King Bhumibol.

Click "play" to listen to No Songkran on Khaosan Road this year and "Download" to keep this file for educational purpose.

backpacker (noun): A person who travels on holiday/vacation carrying equipment and clothes in a backpack (a large bag, often supported on a light metal frame, carried on the back and used especially by people who go climbing or walking) - ผู้ใส่กระเป๋าสะพายหลัง

coronation : the crowning of a king or queen - วันฉัตรมงคล

hangout (noun): a place where somebody lives or likes to go often - ที่ที่คนๆ หนึ่งชอบไปเป็นประจำ

mourning : the process or ceremony of expressing great sadness because someone has died - ไว้อาลัย

scrap : to get rid of; to stop using or accepting - เลิก, ทิ้ง