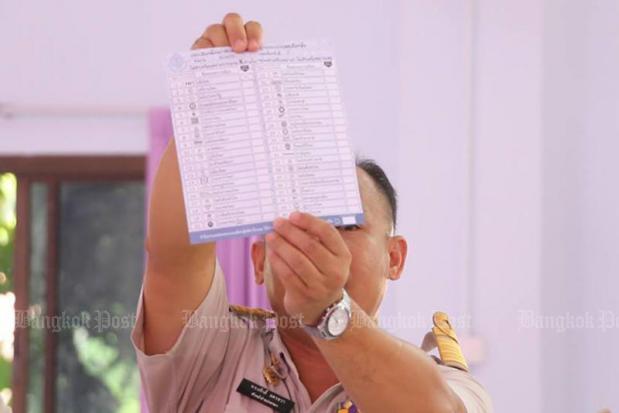 Election officials recount the ballots at a polling unit in Nam Phong district of Khon Kaen on Thursday. (Chakrapan Nathanri)

The Election Commission (EC) on Thursday resolved to call a rerun of the March 24 election at one polling station in the southern province of Chumphon and a recount of marked ballots in all voting stations in a constituency in Nakhon Pathom.

The EC is convinced by evidence that the number of voters who registered at the ninth voting station in Constituency 2 of Chumphon did not match the number of marked ballots, the EC said yesterday.

Therefore, the EC has called a rerun of the March 24 vote at this polling station in Moo 7 of Bang Duang Di in tambon Song Phi Nong of Tha Sae district on April 28.

The EC has also found evidence suggesting that results of the ballot count in every polling station in Constituency 1 of Nakhon Pathom were incorrect.

As a result, a recount at all polling stations in this constituency must be conducted, said the EC.

The date of the recount in Nakhon Pathom wasn't specified, nor was the number of polling stations in this constituency.

EC deputy secretary-general, Sawaeng Boonmee, said the EC became convinced by a complaint and evidence submitted by a candidate from the Future Forward Party (FFP) running in Nakhon Pathom's Constituency 1.

"The recount may result in a significant change to who receives the highest vote and who actually wins in this constituency. As for who should be held responsible for this mistake, the EC will find out after the recount," he said.

Sawika Limpasuwanna, an FFP candidate in Constituency 1 who finished second after the Democrat candidate, according to the EC's unofficial results, petitioned the EC.

She said that after counting votes from every polling unit herself, she found her votes should have outpaced the candidate from the Democrat party by four points.

According to unofficial results, Sinthop Kaewpichit of the Democrat Party won with 35,762 votes, followed by Ms Sawika with 35,615 votes.

The EC had ordered the recount at the two polling stations because the first counts were inconsistent with the number of voters and marked ballots.

In a vote recount at the first station, it was found the spoilt votes fell from 18 on March 24 to 17, which took the total number of voters at this station to 324.

This matches the number of votes counted, said Chatchai Chanphraisi, a member of the Khon Kaen election commission.

In the other recount at the fifth polling station, it was found that Kitti Khamkaenkhun, a candidate from the Palang Pracharath Party actually received 176 votes, not 177.

ballot : the piece of paper on which someone marks who they are voting for - บัตรเลือกตั้ง

constituency : a district that elects its own representative to parliament - เขตเลือกตั้ง

register : to put your name and other information on an official list in order to be allowed to do something, e.g., vote, study, stay in a hotel etc - ลงทะเบียน

submit : to formally give something to someone so that can make a decision about it - ยื่น (เอกสาร) เพื่อการพิจารณา

verified : checked to make sure that something is true or accurate - การพิสูจน์ความจริง, การตรวจสอบความเป็นจริง