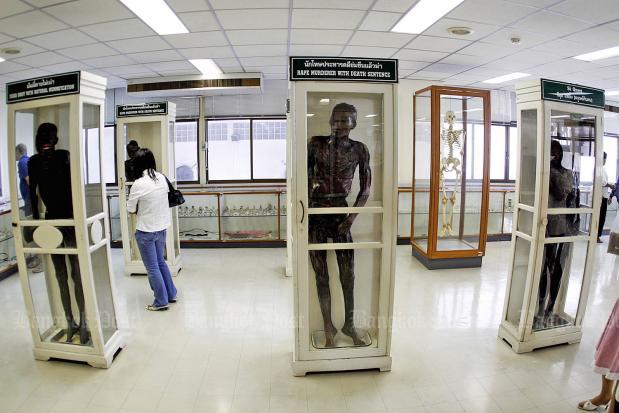 This file photo shows preserved human bodies at a museum at Siriraj Hospital, with the body of 'cannibal' Si Quey in the right showcase. (Photo by Patarachai Preechapanit)

The management of Siriraj Hospital promised to soon reveal more information about executed "man eater" Si Quey, whose body has long been preserved and displayed at its museum, despite an online campaign intended to protect his dignity.

Dr Naris Kitnarong, deputy dean of the Faculty of Medicine at Siriraj Hospital, said on Wednesday that hospital staff were collecting information about Si Quey, including detailed court rulings on his crime and the autopsy of his body done at the hospital in 1959.

"We are going to share the result of the autopsy. We have never ever before released such information to the public," Dr Naris said.

The deputy dean was responding to a campaign on change.org calling on the hospital to remove a sign on the showcase of Si Quey's preserved body that describes him as a "man eater". The online campaign, which also calls for a religious ceremony for his preserved body to be conducted, had on Wednesday received support from more than 11,000 people, with most doubting he was really a cannibal.

Earlier reports said that Si Quey was a man of ethnic Chinese origin born in Shantou. He migrated to Thailand about 70 years ago, and worked as a labourer in several provinces, starting in Prachuap Khiri Khan.

Si Quey was accused of murdering seven children, removing their internal organs, boiling them and then eating them. The murders took place in Prachuap Khiri Khan, Bangkok, Nakhon Pathom and Rayong.

In 1958 he was arrested in Rayong province, reportedly in possession of the body of a boy, together with the extracted heart and liver. He confessed to only the murder in Rayong and denied he was planning to eat the internal organs or had a taste for human body parts, according to earlier reports.

He was executed by a firing squad the same year. The case quickly became the stuff of folklore, with many parents using the name of Si Quey to warn their children to behave.

Click "play" to listen to Siriraj Hospital to expose secrets of 'man eater' and "Download" to keep this file for educational purpose.

campaign : a series of actions intended to produce political or social change - การรณรงค์

execute (verb): to kill someone as a punishment for a crime or without giving them a chance to defend themselves or run away - ประหารชีวิต

extract (verb): to get something from someone who does not want to give it to you - เค้น

firing squad (noun): a group of soldiers or police who are ordered to shoot and kill somebody who is found guilty of a crime -

internal organs : the organs inside a person's body such as stomach and intestines -

migrate (verb): to travel to a new place to live temporarily - อพยพ