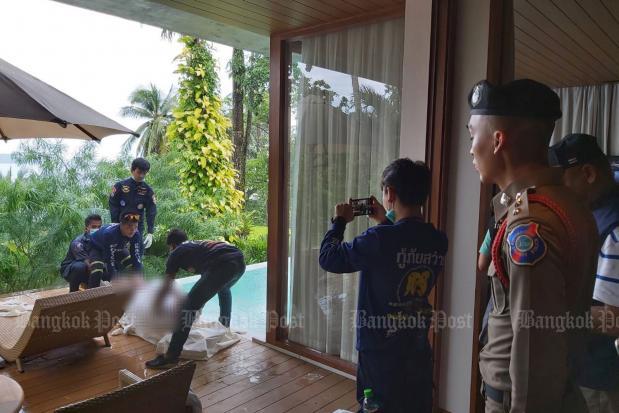 Rescue volunteers remove the body of a British man, 45, found dead in front of his hotel room on Koh Chang island in Trat on Wednesday. (Photo supplied by the Tourist Police Bureau)

A British tourist was found dead near a swimming pool in front of his hotel room on Koh Chang island on Wednesday.

The man, 45, whose name was withheld pending notification of relatives, died at Sea View Koh Chang hotel, tourist police said. The death was reported at 11.45am.

A hotel cleaner told police the man had been lying in front of his room since the early morning. She alerted the hotel’s manager, who found the man had no pulse and immediately alerted police at Koh Chang police station.

Police and forensic officers inspected the room and found no traces of a struggle, only packs of antacid pills and asthma medicine. Police then notified the Tourist Police Bureau, which alerted the British embassy.

Officers determined the man had been dead for several hours. His body was sent to the Forensic Medicine Institute for a post-mortem examination.

Click "play" to listen to British tourist found dead on Koh Chang and "Download" to keep this file for educational purpose.

alert : to tell someone in about a danger or problem so that they can take action to deal with it - เตือนภัย

asthma : a medical condition that makes it difficult to breathe - โรคหอบหืด

notification (noun): the act of giving or receiving official information about something - การแจ้ง

pulse (noun): the regular beat of blood as it is sent around the body, that can be felt in different places, especially on the inside part of the wrist; the number of times the blood beats in a minute - ชีพจร, อัตราการเต้นของหัวใจ, จังหวะการเต้นของหัวใจ