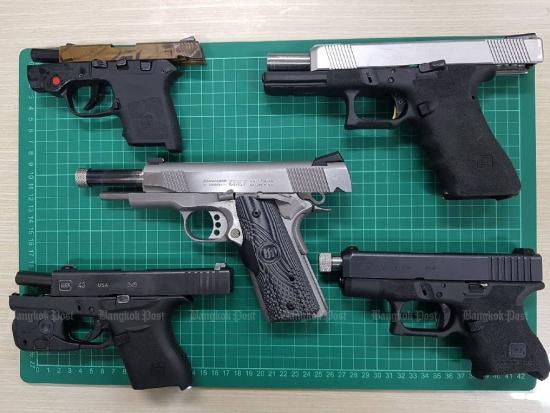 A man claiming to be the Crime Suppression Division (CSD) chief has been arrested by real CSD police -- who were shocked by what they found in his car.

CSD police captured Natthapong Thammathong, 37, as he was driving his Mercedez Benz from a parking building at Don Mueang airport on Monday, it was revealed on Wednesday.

Police were waiting for the man after receiving information that Mr Natthapong was claiming that he was the agency chief and wanted to park the car overnight at the airport.

Pol Maj Gen Jiraphob Puridet -- the real CSD chief -- said the informant suspected there might be illegal items in the car.

A search of the vehicle found 4 million baht in cash in two bags, five pistols, 116 bullets and 0.52 grammes of crystal methamphetamine. The suspect also tested positive for drugs, the CSD chief added.

Mr Natthapong claimed the cash was from his family business, saying they work as a government lottery wholesaler in Loei province. He needed guns to project himself as the family also ran public van routes from Victory Monument and Mor Chit bus terminal to Samut Sakhon, he added.

Police extended the search to four other locations, including his company office and condominium, and found a list of underground lottery customers, rifles, another 2,759 bullets and 23.6 grammes of dried marijuana. An additional 4.8 million baht in cash was also found.

Mr Natthapong was charged with possessing firearms without authorisation and possessing illicit drugs.

He denied the accusations.

Click "play" to listen to Fake police chief arrested with guns, cash, drugs and "Download" to keep this file for educational purpose.

capture : to catch someone or something; to take someone as a prisoner - จับ, จับกุม

claim : to say that something is true although it has not been proved and other people may not believe it - อ้าง

crystal methamphetamine (noun): a white crystalline form of the drug methamphetamine that people take by inhaling through the nose, smoking it or injecting it with a needle -

illicit : against the law - ผิดกฎหมาย

informant : someone who secretly gives information about someone to the police or someone in authority - ผู้ให้ข้อมูล, ผู้บอก, ผู้แจ้ง

marijuana (noun): a drug (illegal in many countries) made from the dried leaves and flowers of the hemp plant, which gives the person smoking it a feeling of being relaxed - กัญชา, ต้นกัญชา

wholesaler (noun): a company that does "wholesale" as a business, buying and selling goods in large quantities -