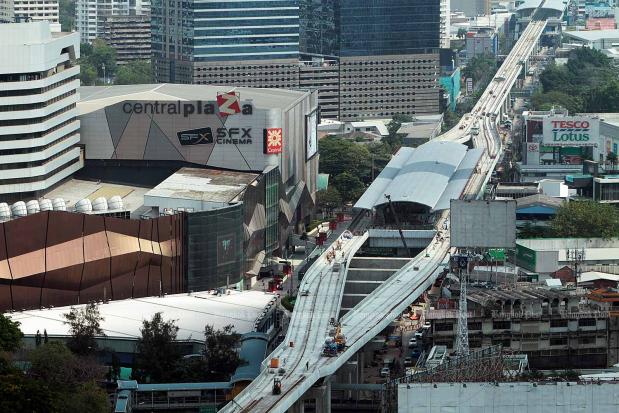 Travel will be free for a limited period when the new Skytrain station at the northern extension of the Sukhumvit line opens on Friday.

"We will not collect fees until the Bangkok Metropolitan Administration [BMA] settles the tariffs with the operator [Bangkok Mass Transit System Public Company Limited]," Bangkok Governor, Pol Gen Aswin Kwanmuang said on Tuesday, after inspecting the new station ahead of its launch.

Prime Minister Prayut Chan-o-cha will open the station on Friday.

The governor said the BMA and government had agreed to cap the price of a single Skytrain ride at 65 baht, while also pledging facilities for disabled travellers such as ramps and lifts to and from the platforms.

The BMA is currently in discussions with the Bangkok Mass Transit System (BTSC) to extend the operating concession for another 40 years. One condition of the deal is that the fare be capped at 65 baht.

Governor Aswin said discussions should be concluded by the end of this month.

He added that the next four Green Line stations -- Phahonyothin 24, Ratchayothin, Sena Nikhom, Kasetsart University -- will be operating by December and the whole extension is expected to be ready by July 2021.

Click "play" to listen to New Skytrain station opens Friday and "Download" to keep this file for educational purpose.

cap : an upper limit on an amount of money that can be spent or borrowed - ขีดสูงสุด, ครอบ

concession : a right that is given to a person or group to do a particular activity - สัมปทาน

pledge : to make a serious promise to do something - สัญญา

tariff (noun): a list of fixed prices that are charged by a company for services or a hotel or restaurant for rooms, meals, etc - ราคา