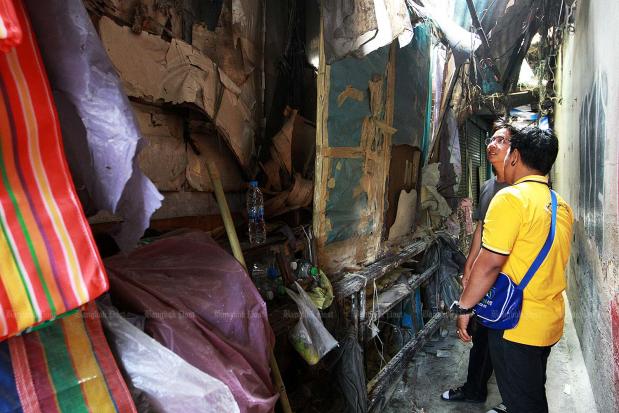 People examine the site of a fire caused by a bomb in Bangkok's Pratunam area on Friday. An unexploded bomb was found in the same area on Wednesday. (Photo by Pawat Laupaisarntaksin)

Authorities recovered an unexploded firebomb at a market in central Bangkok on Wednesday in what they said was a device left over from attacks last week that wounded four people.

Six small bombs and six firebombs went off in Bangkok last Friday as the city hosted a meeting of Southeast Asian foreign ministers that was also attended by top diplomats from the United States, China, and other world powers.

Thai police said the newly discovered firebomb at the Pratunam market in central Bangkok was similar to those set off on Friday.

"The device functioned, but the fire did not catch because it was hidden underneath a pile of clothes so there was not enough oxygen for the fire," a police officer told Reuters on condition of anonymity because he was not authorised to speak to the media.

"The device is timer-triggered and is attached to a power bank, the same sort that were used in last week's attacks, and it was likely placed ... around the same time as other devices," he said.

Prime Minister Prayut Chan-o-cha said authorities have detained nine suspects, including two men who were arrested on Friday, accused of planting two bombs in front of the police headquarters in central Bangkok a day earlier.

The two suspects are from Narathiwat province, one of the largely Malay-Muslim provinces in Thailand's deep south where more than a decade-long insurgency has left nearly 7,000 people dead since 2014.

Deputy Prime Minister Prawit Wongsuwan told reporters that Friday's coordinated attacks were "linked to a southern group" but did not elaborate on the details, saying that more investigation is needed to determine who ordered the attack.

Click "play" to listen to Unexploded bomb discovered in Bangkok’s Pratunam and "Download" to keep this file for educational purpose.

anonymity : when someone's name is not given or known - การไม่ระบุชื่อ

coordinate : to organise the different parts of a job or plan so that the people involved work together effectively - ประสานงานกัน

detain : to keep someone in a police station or prison and not allow them to leave - กักตัว ควบคุมตัวหรือฝากขัง

device (noun): a machine or piece of equipment that does a particular job - อุปกรณ์ เครื่องมือ เครื่องจักร

insurgency : an attempt by a group of people to take control of their country or the area where they live by force - การจลาจล

trigger (noun): something that is the cause of a particular reaction or development, especially a bad one - ตัวนำ, การชักนำ