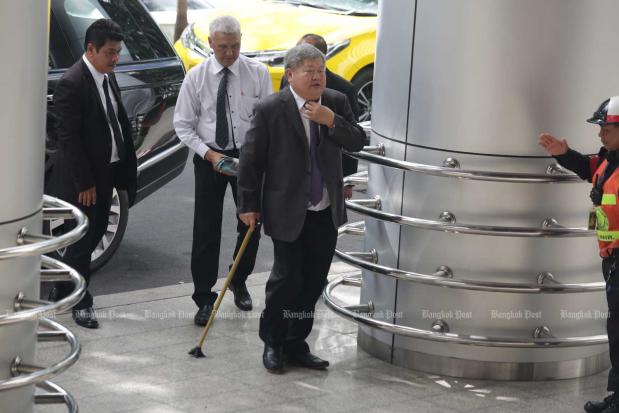 The Criminal Court on Tuesday sentenced Premchai Karnasuta to six months in jail for illegal possession of guns and rejected his request for suspension.

The construction tycoon was previously sentenced to two years and four months for poaching and bribery.

In the latest case, public prosecutors told the court that the president of Italian-Thai Development Plc was found on Feb 7 last year with unauthorised possession of three rifles, a musket and three rifle bullets at his residence in Huai Khwang district, Bangkok.

On May 1 last year he denied the charge but last month he confessed to it. Given the confession, the court commuted the jail term from one year to six months.

Earlier released on bail of 200,000 baht, Premchai was at the Criminal Court to hear the ruling on Tuesday.

His lawyer filed a request with the court proposing that he would enter the monkhood for 15 days, donate three million baht to charity and stay away from guns for the rest of his life in exchange for the court giving him a light punishment or suspending the sentence.

The court told him that he could do the good deeds for himself, but it could not accept the proposal because he was convicted in two other criminal cases by the Thong Pha Phum Court and the Criminal Court for Corruption and Misconduct Case Region VII.

Premchai was seeking bail with the Criminal Court.

Premchai, 64, and the three others were arrested at their unauthorised camp in the Thungyai Naresuan Wildlife Sanctuary on Feb 4 last year in possession of firearms and the carcasses of protected animals, including a rare black leopard.

Click "play" to listen to Premchai sentenced to six more months in jail and "Download" to keep this file for educational purpose.

bribery : the crime of giving money or presents to someone so that they will help you by doing something dishonest or illegal - การให้สินบน

commute (a punishment) : to change a punishment to one that is less severe - ลดโทษ (รุนแรงให้น้อยลง)

rifle : a large gun with a long barrel that you hold against your shoulder to fire - ปืนยาว, ปืนไรเฟิล

suspend a sentence : a situation when the court decides that the person who has been proven guilty of a crime does not have to undergo the punishment given, usually under certain conditions - รอลงอาญา

tycoon : a person who has succeeded in business or industry and has become very rich and powerful - นักธุรกิจที่ร่ำรวยและมีอิทธิพลมาก