Truck explodes when filling up with gas | Bangkok Post: learning 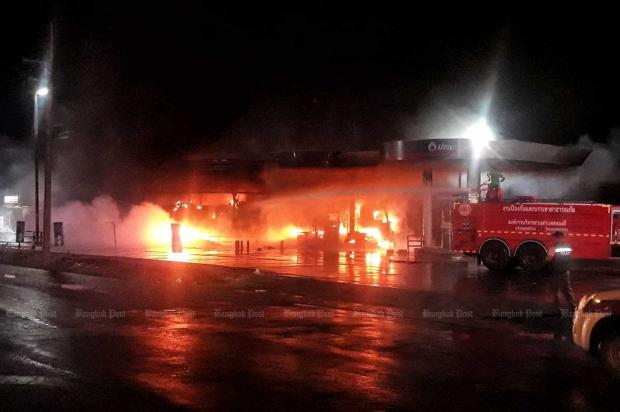 Flames destroy a loaded trailer truck that was filling up at a PTT NGV station in Khlong Luang district, Pathum Thani province in the early hours of Thursday. (Photo by Pongpat Wongyala)

PATHUM THANI: A truck caught fire and exploded while topping up with gas at an NGV station in Khlong Luang district in the early hours of Thursday. The driver safely fled the inferno.

The incident occurred at a filling station near the motorway in tambon Khlong Si about 3.30am, said police.

It took them about 20 minutes to extinguish the blaze. The truck, trailer and cargo were destroyed by the flames and the filling station severely damaged, but there were no injuries reported.

Driver Chamnarn Chachamnarn, 57, told police he was taking cargo to a warehouse in Bangkok’s Ram Intra. It was raining and he pulled into the NGV station, intending to top up and rest.

While still filing up with gas, the truck suddenly caught fire. He jumped from the cab and fled the vehicle. The flames quickly spread around the wheels and the NGV gas nozzle. He and PTT employees tried unsuccessfully to extinguish the flames before fire crews arrived.

The driver was being questioned further. Forensic officers were at the scene to help establish the cause of the fire.

Click "play" to listen to Truck explodes when filling up with gas and "Download" to keep this file for educational purpose.

cargo : things that are being sent by ship, plane, train or truck - สินค้าที่บรรทุกและจัดส่งโดยเรือ เครื่องบินหรือรถไฟ

engulfed : covered or surrounded by something harmful, in this case, fire - ปกคลุม

nozzle (noun): a narrow piece that is attached to the end of a pipe or tube to direct the stream of liquid, air or gas passing through - หัวฉีด

trailer : a truck, or a container with wheels, that is pulled by another vehicle - รถพ่วง