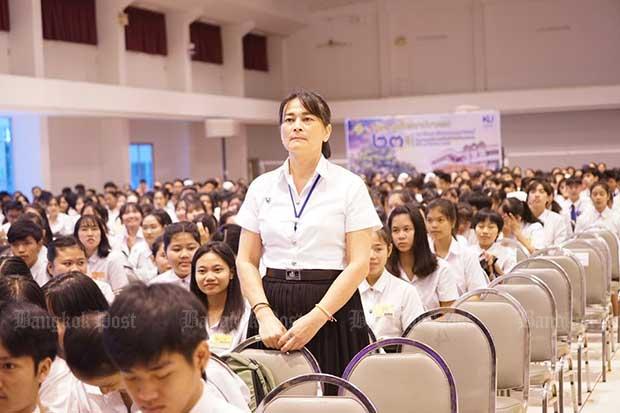 A clip of a Japanese student standing in the way of bikers on a footpath has gone viral.

"Drivers of all kinds of vehicles must drive with responsibility," Megumi Morimota said in an interview on Thursday on the Facebook page of Kasetsart University Chalermphrakiat Sakhon Nakhon province.

A video clip shows Megumi Morimota blocking motorists on the footpath in Bangkok on Tuesday. (Video from Udomsak Nakinjaeng)

Ms Morimota won praise after a clip posted by Udomsak Nakinjaeng on his Facebook account showing her on a pavement, blocking the shortcut bikers like to use and directing them to use the road. The clip was filmed on Tuesday at Lam Sali intersection in Bangkok.

The student from Hiroshima prefecture said she humbly told motorcyclists on Tuesday that it was dangerous to drive on the footpath as they could hit pedestrians. "Some bikers accepted my explanation but others were angry I got in their way," she added.

Ms Morimota said she would continue her mission against bikers on footpaths, regardless of consequences. The Japanese student said she had done that several dozen times during her six-year stay in Thailand.

"All vehicles are banned from using footpaths. If an accident happens, will the driver be responsible for it?" she said.

Click "play" to listen to Japanese student blocks motorcycles on pavement and "Download" to keep this file for educational purpose.

consequences : results of effects of something - ผลที่ตามมา

humbly : not large or in a special way - อย่างอ่อนน้อม,อย่างต่ำต้อย

mission : an important piece of work that a person or a group of people has been given to do - ภาระกิจ หน้าที่

pavement : a path with a hard surface beside a road. The American word is sidewalk - ทางเดิน, ฟุตบาท

pedestrians : people who are walking, especially in an area where vehicles go - คนเดินถนน, คนเดินเท้า

praise : an expression of strong approval or admiration - การยกย่อง, การชื่นชม

prefecture : an area of local government in some countries, for example France, Italy and Japan - อำเภอ

responsibility : a moral duty to behave in a particular way - ความรับผิดชอบ

shortcut : a quicker or shorter way of getting to a place - ทางลัด