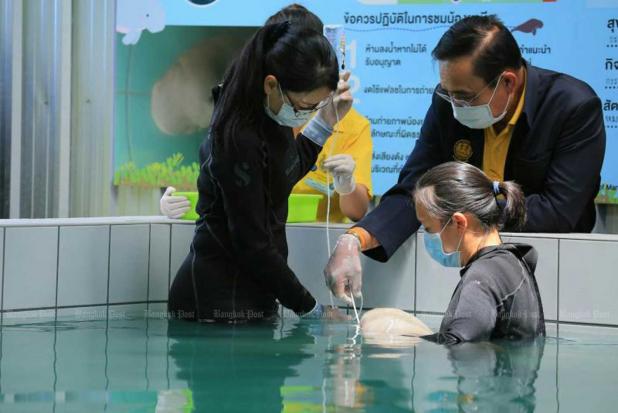 Several parties mourned the death of baby dugong Jamil on Thursday night, the fourth of the mammals in a week and the 17th this year.

The Department of Marine and Coastal Resources said the three-month-old male dugong died at the Phuket Marine Biological Centre at 9.43pm after suffering from shock and resuscitation attempts failed.

Earlier, veterinarians removed seagrass clogging its stomach and intestines at Vachira Phuket Hospital and brought it back to the biological centre.

The department expressed regret for failing to save Jamil and another baby dugong Mariam that died last Saturday.

Thon Thamrongnawasawat, deputy dean of Kasetsart University's Faculty of Fisheries, wrote that with the death of Jamil, the country lost four dugongs in the past six days and 17 this year. He called for an effective plan to protect the marine mammals.

Jamil was found washed ashore in Krabi province on July 1. Her Royal Highness Princess Sirivannavari Nariratana Rajakanya named it Jamil, meaning "handsome man of the sea" in the Yawi language. The princess took Jamil and Mariam under her royal patronage.

Click "play" to listen to 'Handsome man of the sea' dies and "Download" to keep this file for educational purpose.

intestine : the long tube in your body that processes food and carries waste out of your body - ลำไส้

mammal : any animal of which the female gives birth to babies, not eggs, and feeds them on milk from her own body - สัตว์เลี้ยงลูกด้วยนม

patronage : a system of help or protection given to people, often in return for their support   - ระบบอุปถัมภ์

shock : a strong feeling of surprise as a result of something happening, especially something unpleasant; the event that causes this feeling - ช็อค, ความสะดุ้ง, อาการช็อค

stomach (n): the internal organ in which the major part of the digestion of food occurs -