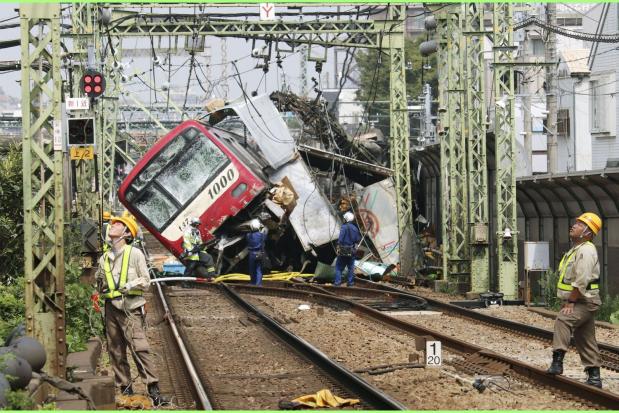 The site of a collision between a Keikyu Line train and a truck in Yokohama on Thursday that killed a man and left more than 30 passengers injured. (Kyodo photo)

YOKOHAMA, Japan: A man died and more than 30 people were injured after an express train collided with a truck and derailed Thursday in Yokohama, police and rescuers from the city near Tokyo said.

The accident occurred at around 11.40am at a crossing on the Keikyu Line between Kanagawa-Shimmachi and Nakakido stations. The first three carriages of the eight-car passenger train derailed and the truck caught fire, they said.

The man killed in the accident is suspected to be the 67-year-old truck driver who the police said was likely trapped underneath the train.

Among those hurt, a female passenger in her 20s sustained serious injuries, police said.

Train operator Keikyu Corp. said the train, running from Aoto in Tokyo to Misakiguchi in Kanagawa Prefecture, could have been travelling at 120km/h when it hit the truck.

The truck is suspected to have been stranded on the crossing before the impact, according to the police.

"I thought I would die," said a 23-year-old man who managed to escape through a window of the train's first carriage. He said he heard another man yell, "Watch out" before the impact.

Black smoke could be seen rising into the air after the incident and the first car of the train was lifted off the tracks. The red carriage leaned over the track with its front windows shattered.

"I heard what sounded like an explosion, the ground rumbled, and the windows of my house shook," said Mika Fujita, 59, who lives in the area.

Ms Fujita saw a man who said he managed to escape from the first train car. "I can't stop shaking from the massive impact," the man was quoted as saying.

Ms Fujita also said she saw another woman talking on her mobile phone while sobbing uncontrollably.

The government set up an office to oversee the response to the accident, while the Japan Transport Safety Board dispatched railway accident investigators to the site.

carriage : one of the vehicles that are joined together to make a train - ตู้โดยสาร

derail : (of a train) to come off the railway tracks - ตกราง

lean : to stand or be set at an angle - เอียง, เอน

shattered : broken into many pieces - ที่แตกกระจาย