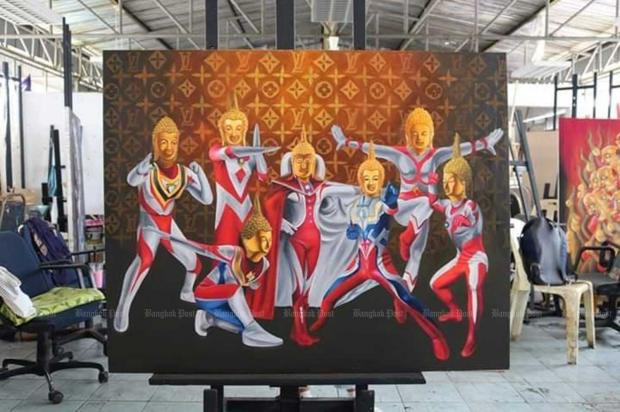 The controversial paintings depicting the Japanese superhero character Ultraman as the Lord Buddha have been banned from sale by their painter's university.

Offers have been made to buy the paintings from undisclosed parties. However, the Nakhon Ratchasima Rajabhat University where the painter, whose name has been withheld, is studying in the Faculty of Humanities and Social Science, has banned the sale of the images, reasoning that they would pile more pressure on the student, according to Kittichai Treeratwicha, the student's supervisor.

If sold and displayed outside the country, the images would trigger a social outcry, which was not the student's intention in producing the art, Mr Kittichai said.

The student would be subject to even more social pressure in that case, he added.

Meanwhile, Samat Jabjon, the university vice rector, said the institute should step in and solve the problem quickly, and not let the student face pressure alone.

The student should be commended for the "artistic courage" to create the painting, which was bound to stoke discontent in some quarters of society.

He said there should be a middle path, where the students can enjoy their freedom to express themselves artistically while also taking social sensitivities into consideration.

The student came under attack after two of her four paintings were shown at an exhibition at Terminal 21 in Nakhon Ratchasima on Sept 3. The organiser later removed them from the show, but not before the images had already been shared on social media. On Sept 7, the student apologised for the paintings.

banned : officially not allowed to do something - ถูกห้าม

courage (noun): the ability to do something that you know is right or good, even though it is dangerous, frightening, or very difficult - ความกล้าหาญ

discontent (noun): the unhappy feeling that you have when you are not satisfied with something - ความไม่พอใจ

party (noun): one of the people or groups of people involved in a situation, an official argument or arrangement - คู่กรณี

sensitivity : needed to be dealt with very carefully to not cause anger or offence - ความละเอียดอ่อน

social (adjective): related to society, to people and the way they are connected to each other and interact with each other - เกี่ยวกับสังคม