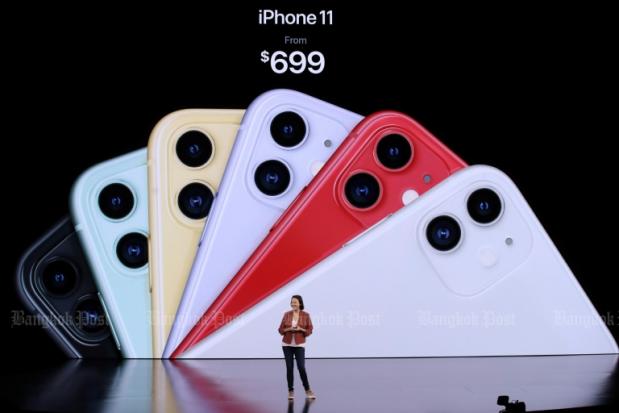 CUPERTINO, United States: Apple unveiled its iPhone 11 models Tuesday with a price cut for the most basic models while also laying out plans for streaming and gaming services.

At an Apple media event, the tech giant reduced the price for the iPhone 11 to US$699 (21,400 baht) and undercut rivals for its gaming and streaming television subscriptions.

Apple unveiled three versions of the iPhone 11 including "Pro" models with triple camera and other advanced features starting at $999 and $1,099, unchanged from last year's prices, with upgraded features including ultrawide camera lenses.

The surprise from Apple was the reduction in the starting price at $699, down from $749 for the iPhone XR a year ago even as many premium devices are being priced around $1,000.

The new iPhones are "jam-packed with new capabilities and an incredible new design," Apple chief executive Tim Cook told a launch event in Cupertino, California as the company set plans to sell the new handsets on Sept 20.

Apple set launch dates for its original video offering, Apple TV+, and its game subscription service as part of efforts to reduce its dependence on the iPhone.

The TV+ service will launch November 1 in more than 100 countries at $4.99 per month and will include a "powerful and inspiring lineup of original shows, movies and documentaries."

While Apple's streaming service will have limited content at first, its price is below the $6.99 for the forthcoming Disney+ service and the more expensive plans from Netflix.

Apple is featuring dramas, comedies and movies as well as children's programs in the service, which will compete against streaming giants like Netflix and Amazon.

Apple said customers who purchase an iPhone, iPad, Apple TV, iPod touch or Mac will get the first year of the service for free.

The new service, which will also cost $4.99 per month, will include more than 100 game titles made for Apple devices and will be available in 150 countries.

Click "play" to listen to Apple launches iPhone 11, new services and "Download" to keep this file for educational purpose.

dependence : the state of needing the help and support of somebody/something in order to survive or be successful - การพึ่งพาอาศัย

exclusive (adj): limited to a particular person, group or thing and not shared with others - แต่ผู้เดียว

inspiring : exciting and encouraging you to do or feel something - ที่สร้างแรงบันดาลใจ

premium : of higher quality or more expensive than other similar things - ที่มีคุณภาพสูง, พรีเมี่ยม

stream : to play video or sound on a computer by receiving it as a continuous stream, from the Internet for example, rather than needing to wait until the whole of the material has been downloaded -

subscription : an amount of money that you pay regularly to receive a product or service or to be a member of an organization - การบอกรับเป็นสมาชิก

triple : three of something - สาม

undercut : when a company offers lower prices than other companies they are competing against -

upgraded (adj): having given something a higher level of importance or quality - ยกระดับ