Half of temple tigers have died | Bangkok Post: learning 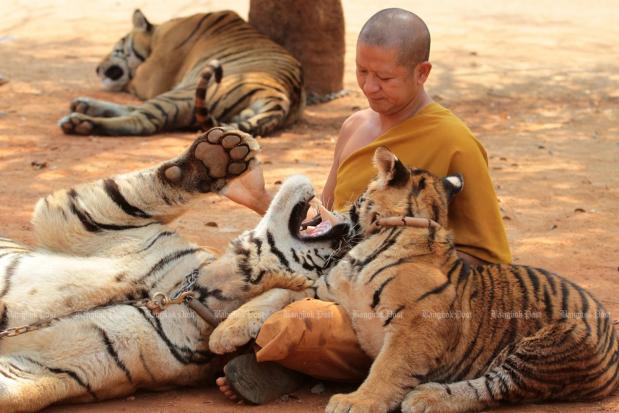 A monk gives a tiger a drink at Wat Pa Luangta Maha Bua in Kanchanaburi in 2015. (Bangkok Post file photo)

More than half of the 147 tigers seized from a Kanchanaburi temple three years ago have died of disease.

The large cats in the care of two wildlife sanctuaries in Ratchaburi province had shown symptoms of paralysis of the larynx since they were brought there in June 2016, according to officials at the Department of National Parks, Wildlife and Plant Conservation (DNP).

The disease, commonly found in tigers and cats, is caused by immune deficiencies, they said. But last year, an official said in an interview the disease could have been caused by stress.

The tigers have been dropping dead one by one since May 2016 and director-general Thanya Netithammakul has been kept informed about developments.

Mr Thanya said experts from Mahidol University had conducted autopsies on them and the results should be known next week. “We have taken good care of them but an infection can’t be ruled out,” he said.

The history of the notorious Kanchanaburi tiger temple dates back to 2001, when forestry officials seized seven tigers and asked a veterinarian to take care of them. He then asked monks at Wat Pa Luangta Maha Bua in Kanchanaburi to help keep them.

The seven animals bred and their numbers rose to 148 in the following 15 years.

The temple started accepting donations and tourists, who posed with the chained cats, raising criticism about animal mistreatment.

Suspicions were confirmed when parts and carcasses of the animals were found with their organs removed or preserved. Since some parts of the animals are used in Chinese traditional medicines and of much market value, they were believed to be part of a wildlife trafficking ring. The activities were exposed in an investigative report in National Geographic.

In 2016, the DNP took legal action against the temple and seized 147 large cats from it.

Click "play" to listen to Half of temple tigers have died and "Download" to keep this file for educational purpose.

deficiency : lacking the ability to do something, in this case, to produce infection-fighting substances - การขาดภูมิคุ้มกัน

immune (adj): involving the system in your body that produces substances to help it fight against infection and disease - เกี่ยวกับระบบภูมิคุ้มกันโรค

mistreatment : to treat or deal with people in a wrong and abusive way, by hurting them or killing them -

notorious : famous for something bad - ซึ่งมีชื่อเสียงในทางไม่ดี

organ : a part of the body that has a particular purpose, such as the heart or the brain - อวัยวะ

paralysis : not able to move or do things - อัมพาต

suspicion (noun): a belief that a crime or improper activity has been committed - ความสงสัย

trafficking : dealing in illegal goods, like drugs, weapons or in illegally moving humans or animals from one place to another - การค้าสิ่งที่ผิดกฎหมาย