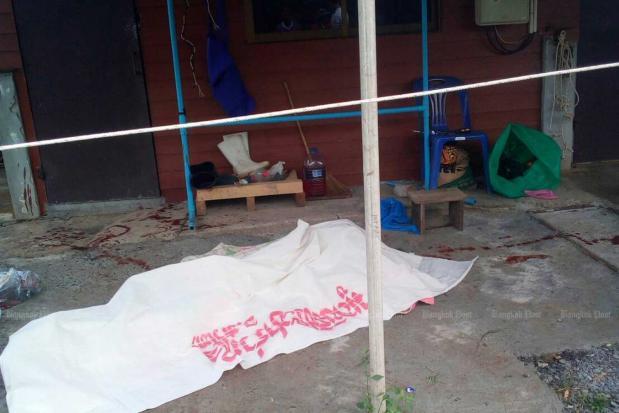 The body of Somchai Namwong, 35, is covered in front of a worker's room at a shrimp farm in Hua Sai district, Nakhon Si Thammarat, on Sunday. (Photo by Nujaree Raekrun)

NAKHON SI THAMMARAT: A man died from excessive bleeding from a cut on the arm at a shrimp farm in Hua Sai district on Sunday morning, police said.

His body was found lying face up in a pool of blood in front of a room in living quarters for workers. He was identified as Somchai Namwong, 35, from Surin province, and a worker at the shrimp farm.

Police and a doctor from Hua Sai Hospital went to the farm to examine the body. A deep cut was found on Somchai's right elbow, which was nearly cut off. A room window had been smashed, and pieces of broken glass were found on the floor.

Police learned that on Saturday night Somchai became extremely angry after a quarrel with his wife. He hit the glass window with his hand to vent his anger and the vein on the right arm at the elbow was accidentally cut by the broken glass, causing him to bleed profusely, leading to his death.

Click "play" to listen to Man smashes window, bleeds to death and "Download" to keep this file for educational purpose.

elbow : the part in the middle of your arm where it bends - ข้อศอก

smash : to break something noisily into many pieces by dropping or hitting it with a lot of force - ทำให้แตกเป็นเสี่ยงๆ, ทำให้แตกเป็นชิ้นๆ

vein (noun): any of the tubes that carry blood from all parts of the body towards the heart - เส้นเลือดดำ, เส้นโลหิตดำ