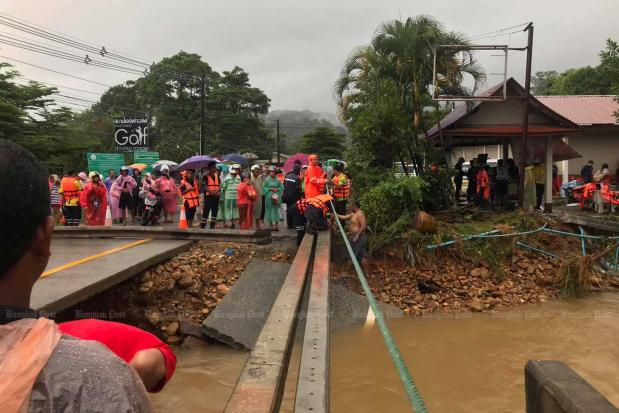 Volunteers secure a rope as a hand-hold for tourists to walk across Khlong Plu canal on a temporary footbridge of power poles, on Koh Chang island in Trat province on Monday. The vehicle bridge was washed out by flooding caused by torrential rain. (Photo by Jakkrit Waewkraihong)

TRAT: Flooding caused by heavy rain has drained off Koh Chang but continued to disrupt life in Muang district, where a section of Sukhumvit Highway was still impassable, on Monday.

Wanroong Kanonkul, kamnan of tambon Koh Chang, said it did not rain on Sunday night and the runoff stopped. but not before considerable damage was done to homes and hotels on the resort island.

The Khlong Plu bridge was torn down and its repair would take a long time.  Electricity authority workmen had used spare power poles to make a temporary footbridge across Khlong Plu canal, so tourists could walk back to their vehicles and return to Bangkok, he said.

The highway was impassable to all vehicles at that point, with no sign of the runoff easing, he said.

Huai Raeng reservoir in Muang district was overflowing into many villages in tambons Tha Kum and Huai Raeng.

The Meteorological Department forecast  is for the rain to ease off in the North and the upper Northeast through into  Tuesday.

Heavy rain is expected to continue in the East and the upper South. Small boats should remain ashore in the upper part of the Gulf of Thailand and the Andaman Sea.

impassable : of a road or path that cannot be travelled on because it is blocked or because of bad weather conditions - ซึ่งผ่านไปไม่ได้

kamnan (noun): the head of a tambon, a group of villages - กำนัน

overflowing : (of a river or body of water) flooding the land next to it - ไหลล้น

pole : a long thin stick, or piece of wood or concrete, often used for holding or supporting something - เสา, หลัก, คาน

runoff : rainfall that cannot be taken in by the soil and which flows into rivers, lakes or the sea - น้ำหลาก, ปริมาณของเหลวที่ไหลออก