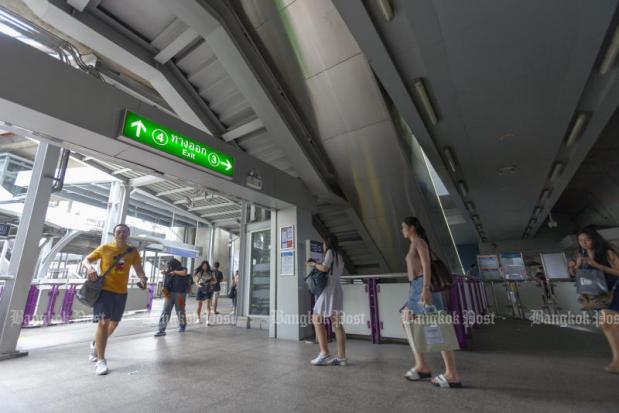 Passengers at Bang Wa station on Aug 24, 2019. The Blue Line service will be extended all the way to Lak Song from Saturday. (Photo by Watcharawit Phudork)

The MRT Blue Line will begin running to its final destination at Lak Song from Saturday, with commuters offered free rides for a week.

MRT operator Bangkok Expressway and Metro Plc on Wednesday announced the opening of the final stage extension from Bang Wa to Lak Song stations. Passengers  can travel free until the the official opening on Sept 29.

The MRT extended the line from Hua Lamphong to Tha Phra on July 29 and to Bang Wa a month later.

The operator said a test run on the section from Tao Poon to Tha Phra is planned before year-end, with the opening set for March 31 next year.

Click "play" to listen to New MRT extension to open Saturday and "Download" to keep this file for educational purpose.

commuter : a person who regularly travels between work and home - คนเดินทางระหว่างบ้านและที่ทำงาน

test run : one set or series of tests given at one time -