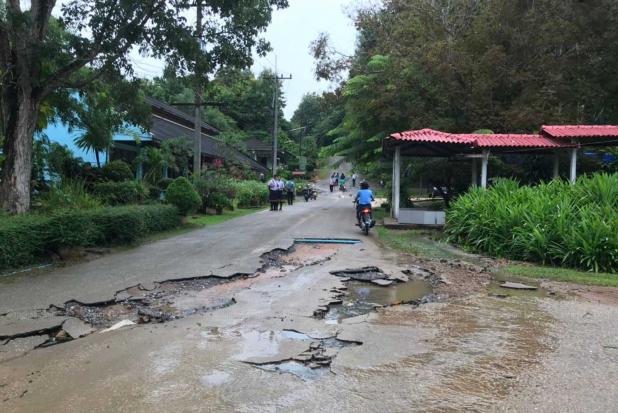 Forest run-off, triggered by hours of heavy rain late Thursday night, damages a road and causes flooding at a school in Sai Yok district of Kanchanaburi. (Photo by Piyarat Chongcharoen)

Heavy rain is forecast for at least 50 provinces, including Bangkok, through into Sunday, with temperatures to plunge in upper Thailand from Monday to Wednesday.

The monsoon trough will move across the lower North, the upper Central and the Northeast region before the arrival of moderate high pressure system moving in from China that will collide with hot air over the North and the Northeast from Sept 20-22, the weather office said on Friday morning.

This will bring heavy to very heavy rain and gusty winds to many areas across the country through into Sunday. In upper Thailand temperatures are forecast to drop 3-5°C from Monday to Wednesday.

The forecast is for downpours in more than 50 provinces, including Bangkok, from Friday.

Click "play" to listen to Heavy rain forecast into Sunday and "Download" to keep this file for educational purpose.

downpour : a lot of rain in a short time - ฝนตกหนักมาก, พายุฝน

forecast : a statement about what will happen in the future based on information available now - การพยากรณ์, การคาดการณ์