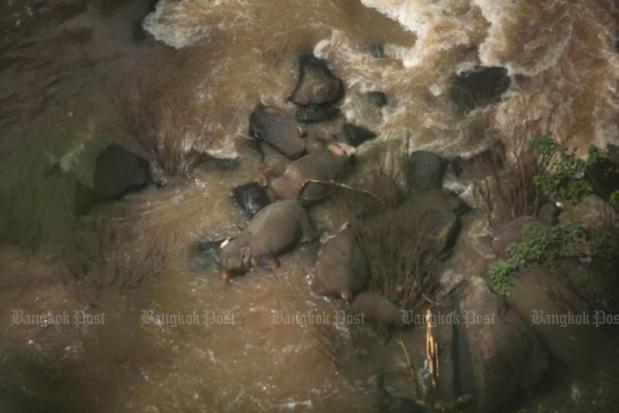 An operation will be launched on Sunday to remove the carcasses of six elephants from Kaew Narok waterfall in Khao Yai National Park. (Photo supplied)

PRACHIN BURI: An operation was launched on Sunday to remove the carcasses of six wild elephants found on Saturday after falling from the top of Haew Narok waterfall in Khao Yai National Park and drowning, an official said.

Park officials discovered on Saturday morning that six wild elephants had drowned after the fall. They managed to help two other members of the herd which were struggling to clamber out of the waterfall at about 3.30pm.

Wichai Pornleesaengsuwan, director of the national park section of the Prachin Buri-based Conservation Administration Office, said the two elephants later rested at a spot near the waterfall. They were in satisfactory conditions after the park officials gave them banana, sugarcane, pineapple and some antibiotics.

At about 3am on Sunday, the two elephants were found to have disappeared, Mr Wichai said. They were believed to have returned to the woods safely.

Mr Wichai said a team of park officials will track the two elephants to confirm they had made it back into the wild.

Click "play" to listen to Operation launched to remove dead jumbos from waterfall and "Download" to keep this file for educational purpose.

clamber : to climb something with difficulty, using your hands and feet - ปีนด้วยความลำบาก

disappear : to move something or someone somewhere where they can no longer be seen - หายไป, สาบสูญ, สูญหาย

herd : a large group of animals of the same type that live and move about together - ฝูงสัตว์