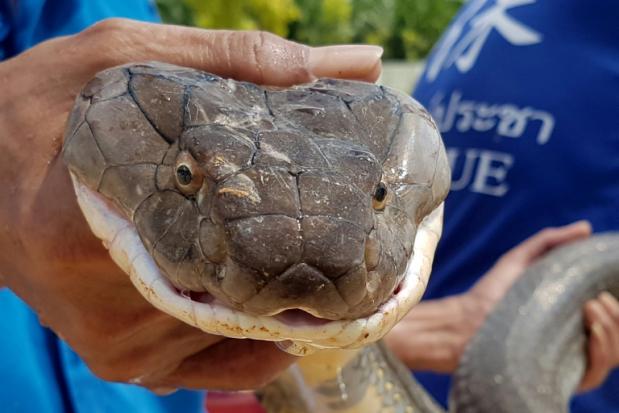 A Krabi Pitakpracha Foundation snake handler holds the four-metre king cobra he pulled from a sewer in Krabi.

A four-metre king cobra was pulled from a sewer in the southern province of Krabi in an hour-long operation, a rescue foundation said Tuesday, describing the snake as one of the largest they had ever captured.

Footage of the daring capture showed a man chasing the cobra -- the world's longest venomous snake -- into a dark and cramped drainage pipe.

The cobra splashed around in water and tried to slither back into the pipe, but was pulled out by the tail after multiple attempts.

A security guard on the housing estate where it was found first alerted the rescue group on Sunday.

"Seven rescue workers, including me, went there," said Kritkamon Kanghae, 26, adding that the estate was built on land that was once jungle.

Mr Kritkamon said the snake was more than four metres long, weighed 15 kilos, and was the third-largest they had found.

It was later released into the wild.

Click "play" to listen to VIDEO: Four-metre king cobra pulled from Krabi sewer and "Download" to keep this file for educational purpose.

alert : to tell someone in about a danger or problem so that they can take action to deal with it - เตือนภัย

capture (noun): the act of capturing somebody/something or of being captured - การจับได้

cramped : not having enough space or time - คับแคบ

jungle (noun): a thick tropical forest, a place with many trees and wild animals and few people - ป่า

pipe (noun): a long tube used for carrying water, oil, gas, etc. from one place to another place - ท่อ

slither : to move somewhere in a smooth, controlled way, often close to the ground -

the wild : living or growing in natural conditions; not kept in a house or on a farm - สภาพธรรมชาติ

venomous : producing venom (the poisonous liquid that some snakes, spiders, etc. produce when they bite or sting you) - มีพิษ