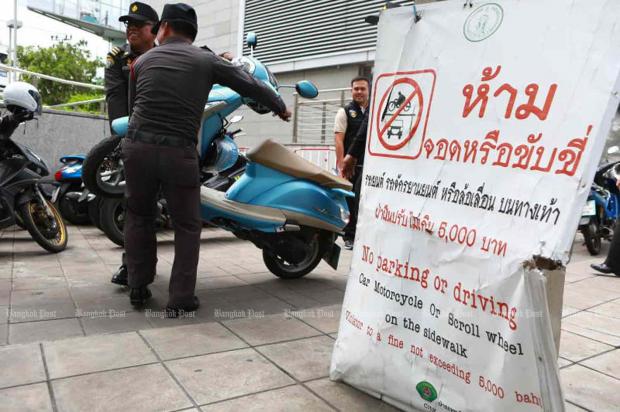 City Hall's campaign to crack down on motorcyclists riding or parking on pavements has seen the number of offenders caught by police fall by 37% during its 16 months, according to the Bangkok Metropolitan Administration (BMA).

"The decrease shows that riders are scared of paying the 2,000-baht penalty fine that the BMA introduced," Suphakit Boonkan, deputy director of the BMA's Municipal Police Department told the Bangkok Post.

In August, fines for the offence were raised to 2,000 baht from 1,000 baht, after the BMA in July last year declared war against riders using pedestrian pavements. Initially, the BMA raised the penalty from 500 baht to 1,000 baht but saw little change to motorcyclists' behaviour.

In September last year, 1,978 violators were arrested. One year later that number had fallen to 1,241.

While the city administration is continuing its push to keep motorcycles off the pavements, Mr Sakoltee offered a more conciliatory tone with regard to the recent crackdown on street food vendors.

"Some street vending areas must continue. One thing that is certain is that it is impossible to remove all street food vendors from Bangkok. However, we need to establish a policy that clarifies which streets trading is allowed and what rules these street food vendors need to follow," said Mr Sakoltee.

So far, the BMA has axed 508 street vending spots in 50 districts, some of them including food vendors. However, 175 spots are still active in 19 districts.

Click "play" to listen to BMA claims pavement riding campaign success and "Download" to keep this file for educational purpose.

conciliatory (adj): having the intention or effect of making angry people calm; ready to give up something in a return for an agreement - ซึ่งประนีประนอมกัน,ซึ่งผูกไมตรี, มีแนวโน้มที่เป็นมิตร

declare : to state something firmly and clearly - ยืนยัน

pavement : a path with a hard surface beside a road. The American word is sidewalk - ทางเดิน, ฟุตบาท

penalty : a punishment, or the usual punishment, for doing something that is against a law - โทษ

violators (noun): people who go against or refuse to obey a law, an agreement, etc. - ผู้ฝ่าฝืน, ผู้ละเมิดกฎ