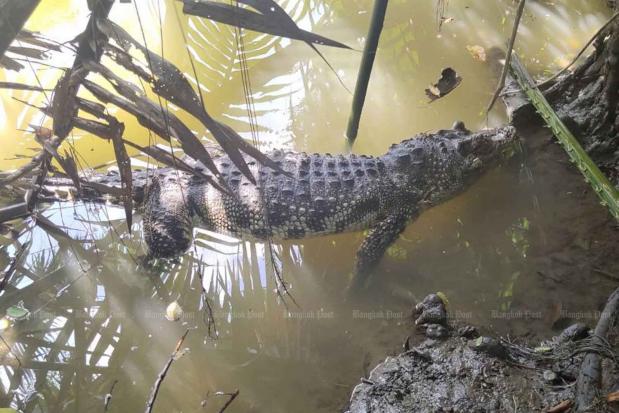 SAMUT PRAKAN: A dead two-metre-long crocodile was found near a house at Khlong Tha Kwian canal in Phra Pradaeng district on Wednesday, prompting local officials to begin searching for an illegal farm in the area.

The croc carcass was floating in the canal in front of a house in Moo 8 village of tambon Bang Chak. The house resident said he found the dead reptile while looking for the source of stench he had suffered through in the past few days.

Local residents quickly told their children not to swim in the canal, for fear that live escaped crocodiles could be around.

Officials of the local Lad Luang municipal area joined local police and fishery officials in searching the area  for other crocodiles, and looking for any illegal crocodile farms in the area.

Fishery officials took the rotting carcass away for examination. They believe the croc had been dead at least two days.

escape (noun): getting away from a place; leaving a place where you are in danger - การหนี