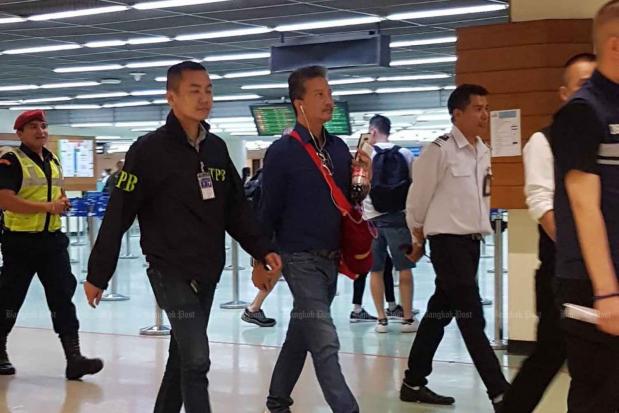 The self-professed billionaire groom who fled, leaving his Buri Ram bride with a huge wedding party debt, was arrested at Don Mueang airport upon returning from Hong Kong on Thursday night.

Police said Thananat Siripiyaporn, 49, was taken into custody about 9.30pm after disembarking from the plane.

Mr Thananat was wanted on a fraudulent cheque charge. A biometric scan alerted immigration police to his arrival.

Mr Thananat, aka Sia Top, left for Hong Kong on Oct 6, shortly after his marriage in May to a 30-year-old product presenter and lavish wedding party, in the northeastern province of Buri Ram, made news headlines.

The bride's family complained that he had organised a wedding ceremony and party they said cost about 3.5 million baht, and then left suddenly after the wedding without paying the bill. They alleged the large dowry cheque disappeared with him.

They said they did not know much about him but the bride had told them he was a wealthy businessman, worth billions of baht.

Click "play" to listen to 'Billionaire' who left bride arrested and "Download" to keep this file for educational purpose.