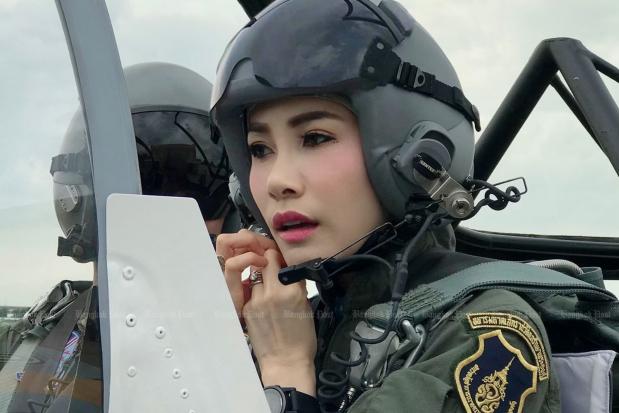 An undated photo of Chao Khun Phra Sineenart Pilaskalayanee from a set published in the Royal Household Bureau's website in late August. The photo set was later removed.

His Majesty the King has removed all the titles, military ranks and positions of Chao Khun Phra Sineenart Pilaskalayanee, as well as recalling all the royal decorations she was given, for failing to conform with codes of conduct for palace officials and being disloyal to His Majesty.

The royal announcement was published in the Royal Gazette on Monday and took effect on the previous day.

According to the announcement, Chao Khun Phra Sineenat had opposed the coronation of Her Majesty the Queen after the royal marriage on May 1, 2019. She had been openly against the ceremony, applied pressure to prevent the coronation from taking place and had tried ways and means to get His Majesty to appoint her instead, according to the announcement.

"Despite her expectations, the ceremony took place. She also breached royal authority by issuing orders involving Their Majesties’ activities."

To alleviate the problem and prevent inappropriate actions that could affect the royal institution and the country, His Majesty appointed her as Chao Khun Phra Sineenart Pilaskalayanee, read the announcement.

Since then, His Majesty has kept a close watch on her behaviour and actions and found she did not appreciate his kindness nor behave in a manner worthy of her new position.

She was not satisfied with her new position and tried to act in ways that matched the status of Her Majesty.

"She did not understand royal traditions and acted defiantly towards Their Majesties. She also exploited her new position by issuing orders, pretending they were royal commands. In addition, she ordered people to comply with her personal wishes without accountability, saying she had received royal orders to act on His Majesty’s behalf."

Her actions were intended to bolster her popularity and benefit herself rather than the public interest. She did all this in the hope that His Majesty would grant her a higher position that would match that of Her Majesty.

The actions of Chao Khun Phra Sineenart disrespected His Majesty, lacked gratitude and failed to recognise royal kindness. They created rifts among palace officials and misunderstanding among the public, as well as undermining the country and the royal institution.

By the royal command granted under Sections 9 and 15 of the 2017 constitution, His Majesty relieved Chao Khun Sineenart of her position in the military division of the royal administration, revoked all her royal titles and military ranks and recalled all the royal decorations given to her.

"Chao Khun Phra" is an ancient title for senior consorts used in King Rama VI's reign. The last consort with the title died in 1943.

appoint : to choose someone officially for a job or responsibility - แต่งตั้ง,ตั้งให้เป็น

bolster : to make something stronger or more effective - ทำให้เข้มแข็ง

coronation : the crowning of a king or queen - วันฉัตรมงคล

defiantly : refusing to obey a person or rule; refusing to accept that something is true - แสดงการท้าทาย, ไม่ยอมทำตาม, ไม่เชื่อฟัง

exploit : to use for your own benefit - หาประโยชน์จาก

undermine : to make something or someone become gradually less effective or successful - ทำให้อ่อนลง,ทำลายทีละน้อย,ทำลายอย่างลับ