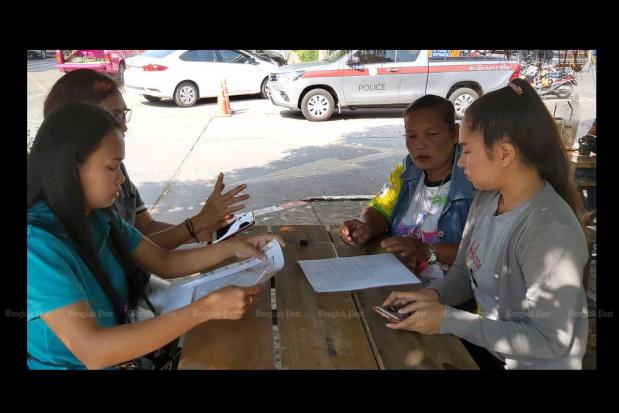 Pitchaya Kaesungnoen, 19, left, and Meena Sapsarp, 25, talk to reporters in Nakhon Ratchasima after filing their extortion complaint with Muang police against people claiming to be copyright agents. (Photo by Prasit Tangprasert)

NAKHON RATCHASIMA: Two women have told police they were extorted by the same people who tricked a teenage girl into making krathong floats featuring copyright cartoon characters, and then arrested and fined her.

Meanwhile, Justice Minister Somsak Thepsuthin has ordered local officials to provide assistance to the schoolgirl fined for copyright violation, and a TV report identified the "agent" who led police to the young girl as a motorcycle taxi driver.

Meena Sapsarp, 25, and Pitchaya Kaesungnoen, 19, on Wednesday filed their extortion allegation with police.

Ms Meena said she was arrested on Oct 31 for making krathong baskets with famous cartoon characters.  She told police the man claiming to be a copyright agent had imposed a fine of 70,000 baht, but she did not have that much money. After negotiations, she paid a fine of 30,000 baht - which she had to borrow from a neighbour.

Ms Pitchaya said she was caught on July 13 in Sung Noen district for selling pirated Yeti coolers. The officers demanded she pay a fine of 30,000 baht. After negotiations, she paid 10,000 baht.

The two women said those who led police to arrest them were the same copyright agents who arrested a 15-year-old girl in Muang district, a case which grabbed news headlines on Tuesday.

The girl, identified only as “Orn’’, was arrested and, after negotiations, fined 5,000 baht for making krathong baskets featuring cartoon characters that were ordered online as part of a police "sting".

She was making and selling flower-pattern floats for this weekend’s Krathong Festival, to raise money to help with her schooling.

T.A.C Consumer Plc, the representative of copyright holder San-X of Japan, later issued a statement saying the company had not assigned anyone to the operation that led to the arrest of the girl.

Amarin TV reported that the man who led police to arrest the 15-year-old girl is a  motorcycle taxi driver.

TV reporters went to his house in Nakhon Ratchasima, but he was not there.

Neighbours identified him only as "Nan". They said his wife sells grilled meat balls on sticks.

Click "play" to listen to Two women claim extortion by 'copyright agents' and "Download" to keep this file for educational purpose.

agent (noun): a person or company that buys or sells something for someone else - ตัวแทน

extortion : the crime of trying to obtain something by force or threat - การขู่กรรโชก  รีดไถ

Justice Minister (noun): The minister who heads the Ministry of Justice - รัฐมนตรีว่าการกระทรวงกระทรวงยุติธรรม

negotiations : formal discussion in which people or groups try to reach an agreement - การเจรจาต่อรอง

operation : an activity which is planned to achieve something - การดำเนินการ

sting operation : an action by police to catch criminals by tricking them, e.g. by pretending to buy illegal drugs -