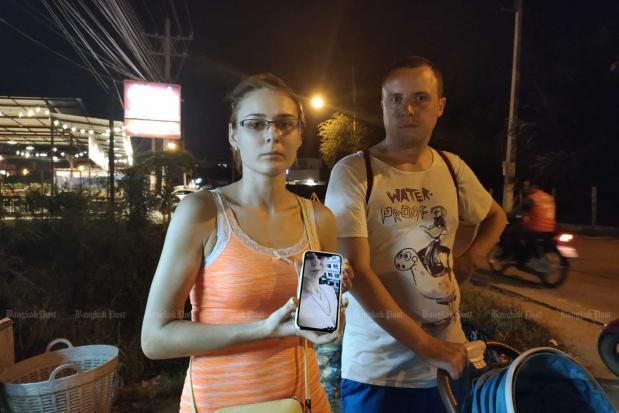 Pankratova Elena, 25, shows a picture of herself wearing the gold necklaces stolen by a motorcyclist in Pattaya on Sunday night. (Photo by Chaiyot Pupattanapong)

PATTAYA: A motorcyclist snatched two gold necklaces from a Russian woman's neck while she was with her young child on a side road about 11.30pm on Sunday.

Pankratova Elena, 25, told police via an interpreter, that she and her husband were walking back to their hotel, with their with their three-year-old daughter in a stroller, on Soi Wat Bunkanjanaram.

A man approached them on a motorcycle as she was bending over to tend to the child. He snatched two gold necklaces she was wearing from around her neck and sped off.

Click "play" to listen to Motorcyclist grabs gold from tourist's neck and "Download" to keep this file for educational purpose.

necklace : a piece of jewellery consisting of a chain, string of beads, etc. worn around the neck - สร้อยคอ

stroller (n): a chair on wheels in which a baby or young child can be pushed along -

tend : to take care of someone or something - รับใช้ ดูแล