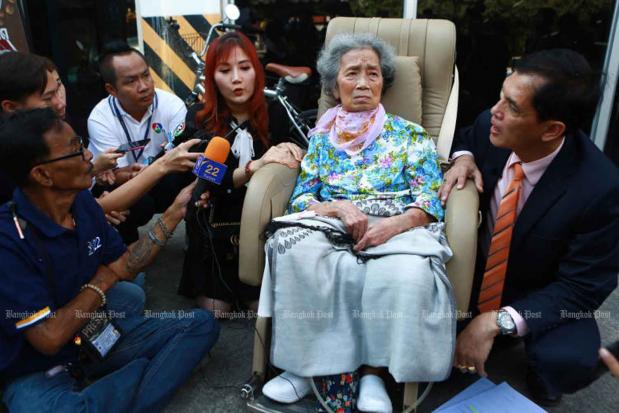 A 76-year-old woman is suing her daughter, a bank and four bank employees for theft of more than 250 million baht from her accounts while she was in hospital.

Huay Sriwirat arrived in a wheelchair at Phra Khanong Civil Court on Tuesday with her granddaughter and a lawyer. She filed a civil lawsuit against her daughter Mawadee Sriwirat, 53, accusing her of colluding with four employees of Kasikornbank to steal the money from her two bank accounts.

The lawyer said that in 2014 Ms Huay had been admitted to a hospital for treatment of coronary artery disease. While she was in hospital the accused people allegedly changed the condition for withdrawal of money from the two bank accounts from her signature to a fingerprint.

About 253 million baht had been taken from the accounts through many hundreds of withdrawals, the lawyer said.

Mintra Sriwirat, the 29-year-old granddaughter, said her grandmother had accumulated wealth from the business of building frames for air-conditioners for about three decades. Ms Mawadee is the second of her three children. Ms Mintra is the daughter of Ms Huay's eldest son.

Ms Huay had accounts with Kasikornbank's Srinagarind Km 9 and Sukhumvit 101 branches, and found that the passbooks were missing from her safe when she left hospital and returned home, Ms Mintra said.

A complaint had been filed with Udomsuk police in 2017. As the case had made little progress, Ms Huay sought help from a lawyer and it was decided to bring a civil suit, Ms Mintra said.

In response, Kasikornbank stated that the employees involved had no bad intention and sought only to serve the needs of a customer through her immediate relative.

Click "play" to listen to Woman sues daughter, bank for theft of B250m and "Download" to keep this file for educational purpose.

civil lawsuit : a case filed with a court that deals with non-criminal matters, especially complaints made by people against other people or organisations - คดีที่ยื่นฟ้องต่อศาลแพ่ง

collude : to act together secretly or illegally in order to deceive or cheat someone - สมรู้ร่วมคิด

coronary artery : either of the two arteries that supply blood to the heart - หลอดเลือดแดงใหญ่ที่หัวใจ

frame (noun): a structure that forms part of an object and gives it its strength and shape or holds something firmly in place - กรอบ

wheelchair : a special chair with wheels, used by people who cannot walk because of illness, an accident, etc - เก้าอี้รถเข็นสำหรับคนป่วยหรือคนพิการ

withdrawal : taking money out of the bank - การถอนเงิน