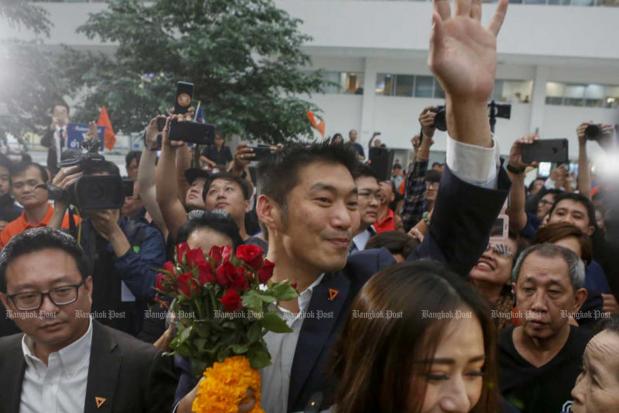 Future Forward Party leader Thanathorn Juangroongruangkit arrives at the Constitutional Court in Bangkok on Wednesday to hear its ruling that disqualifies him as MP. (Photo by Pattarapong Chapattarasill)

The Constitutional Court has ruled 7-2 to disqualify Future Forward Party leader Thanathorn Juangroongruangkit as MP for having shares in a media company when applying to become MP.

The case was submitted by the Election Commission (EC), which asked it to disqualify Mr Thanathorn for having shares in a media company, which is not allowed under the 2017 Constitution.

For the March 24 election, FFP filed the names of its list MP candidates with the EC on Feb 6, the date Mr Thanathorn was considered to have officially applied.

Mr Thanathorn held 675,000 shares in V-Luck Media Co,. Earlier, he told the court that he sold the shares to his mother Somporn on Jan 8 and his mother paid him 6.75 million baht in a cheque dated on the same day.

However, the court said it did not see any official evidence reflecting the change in shareholders which should have been reported to the Business Development Department promptly.

The court said that the cheque from Mrs Somporn was cashed after 128 days, or on May 16, the date the Election Commission filed the case with the court.

The court dismissed the argument of Mr Thanathorn's wife that she had been too busy to cash the cheque because she just had a baby.

Mr Thanathorn was seen campaigning in Buri Ram province on Jan 8 and he claimed he had driven to his house in Bangkok on the same day to transfer the shares — he had submitted speeding tickets as proof.

To this, the court said the testimony only proved he was in Bangkok on that day but there was no evidence the share transfer could have taken place on the day.

After the ruling, the EC must take further action against Mr Thanathorn, which could be a jail term, a large fine or a long ban from politics. It will have to file a case to the Supreme Court for politicians to make the final decision.

Thanathorn pledged to continue his political role outside parliament.

Click "play" to listen to Thanathorn disqualified as MP and "Download" to keep this file for educational purpose.

campaign : to take part in a planned series of activities (a campaign) designed to persuade voters to vote for a particular candidate or political party - รณรงค์หาเสียง

candidate : a person who is trying to be elected - ผู้สมัครรับเลือกตั้ง

cash a cheque : to deposit a cheque at a bank and receive money in exchange -

Constitution Court : the court that decides whether or not laws follow the constitution - ศาลรัฐธรรมนูญ

dismiss : to decide that a discussion or consideration should not continue - เลิก

disqualify : to not allow someone to do something because they have committed an offence - ไม่มีคุณสมบัติพอ

pledge : to make a serious promise to do something - สัญญา

promptly : in an immediate or quick way - ทันที

share : any of the units of equal value into which a company is divided and sold to raise money. People who own shares receive part of the company's profits - หุ้น

testimony : a formal statement about something that you say, know or experienced, usually given to a court of law - คำให้การ