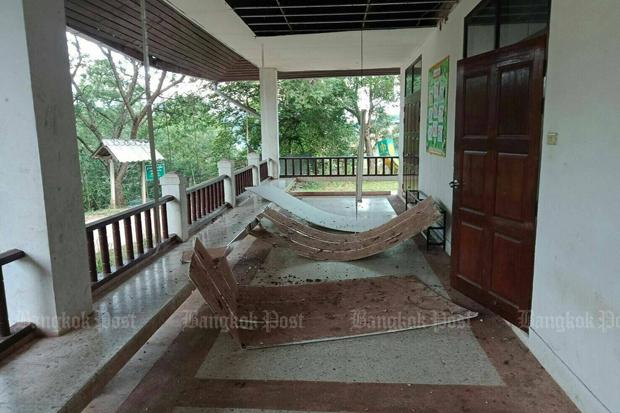 A school operated by the Border Patrol Police in Bor Kluea district of Nan is damaged after an earthquake in Laos near the Thai border in the northern province. (Photo from @Ruamduay Twitter account)

Residents in Chiang Mai province felt a long period of shaking but saw no major damage. High-rise buildings swayed slowly for at least half a minute in Bangkok, startling residents.

The US Geological Survey said the 6.1-magnitude quake on Thursday morning was about 10 kilometers below the surface.

It was centered in northwestern Laos, about 31 kilometers from Chaloem Phrakiat district in Nan province, and occured around 7.00 am.

Moderate quakes of 4.6 and 5.7 magnitude shook the same area overnight.

Lights swinging in Bangkok from the earthquake near Laos border #แผ่นดินไหว​ pic.twitter.com/OqTNJFFOCV

Click "play" to listen to Earthquake on Thai-Lao border felt in Bangkok and "Download" to keep this file for educational purpose.

shake (past form shook) : to move or make someone or something move with short, quick movements - สั่น, สั่นสะเทือน, เขย่า

startling : to make people suddenly very surprised in a way that slightly shocks or frightens them - ผวา, ขวัญหาย

sway : to move slowly from side to side; to move something in this way - แกว่งไปมา, โซเซ