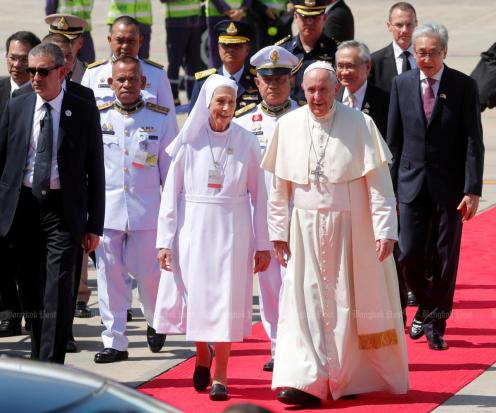 Pope Francis flanked by a Salesian nun Ana Rosa Sivori, who is his cousin, arrives at a military air terminal in Bangkok on Wednesday. (Reuters photo)

Pope Francis arrived in Bangkok on Wednesday, greeted by a sea of devout Catholics awaiting the first papal visit in almost four decades.

The 11-hour flight from Rome -- carrying the pope, his entourage and around 70 journalists and media professionals -- arrived in Bangkok just after midday on Wednesday.

Throughout his three-day visit, Pope Francis will have a special interpreter, Sister Ana Rosa Sivori -- his second cousin, who has been running a Catholic girls' school in Udon Thani.

The papal visits to Thailand and Japan are part of mission to boost the morale of each countries' small Catholic minorities.

The pope is also expected to use the occasion to raise concerns about human trafficking and peacemaking efforts in Thailand.

Pope Francis is scheduled to give a public speech later, in which he is expected to express his admiration for Buddhist-majority Thailand, for welcoming Catholic missionaries who came to the country many centuries ago.

The trip coincides with the 350th anniversary of the Apostolic Vicariate of Siam. Established back in 1669, its creation marked the first formal steps taken by the Church to introduce Catholicism to the country.

The last pope to visit Thailand was Pope Saint John Paul II, who visited the country over four decades ago in 1984.

At present, the country's 388,000-strong Catholic community makes up less than 1% of the population. Most live in the North and Central regions.

Click "play" to listen to Pope Francis begins Thai tour and "Download" to keep this file for educational purpose.

admiration : a feeling of respect and liking for somebody/something - การชื่นชม, การยกย่องชมเชย

Catholic (noun): Roman Catholic; a member of the part of the Christian Church that has the Pope as its leader - สมาชิกของโบสถ์คาทอลิก

cousin : a child of your uncle or aunt; someone who is related to you through a brother, sister, uncle, or aunt of one of your parents - ลูกพี่ลูกน้อง, ญาติห่างๆ

entourage : a group of people who travel with an important person - คณะผู้ติดตามของบุคคลสำคัญ

missionary (noun): a person who is sent to a foreign country to teach people about their religion - ผู้เผยแพร่ศาสนา, มิชชันนารี

morale : the amount of confidence and enthusiasm, etc. that a person or a group has at a particular time - กำลังใจ, ขวัญ

privy councillor : a member of the group of appointed advisors to the King of Thailand - องคมนตรี