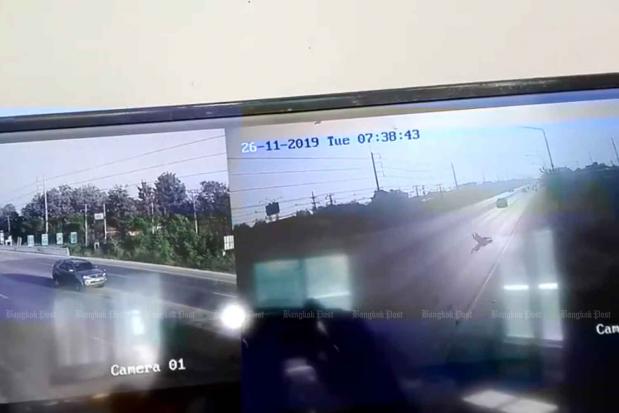 Surveillance camera footage shows the body of Thanakrit Lasao, 17, after his big bike collided with a car in Chiang Mai Tuesday morning. (Screenshot from a video clip posted on the Facebook page of a rescue team in Muang Ton Pao municipality in San Kamphaeng district)

A high school boy died after slamming his newly-bought big bike into an oncoming car after a van pulled out in front of him in Chiang Mai.

The accident happened in San Kamphaeng on Tuesday morning after Thanakrit Lasao, 17, left his house on his new Honda CBR650F motorcycle for school.

Surveillance camera footage showed a van suddenly pull onto the middle of the road in front of the big bike. The teenager swerved into oncoming traffic to avoid the van, but almost immediately collided head-on with a car. The impact sent Thanakrit flying through the air before falling to the road, about one kilometre from his house. Rescue workers rushed him to San Kamphaeng Hospital, where he later died.

Media quoted Pokin Tejakhod, the boy's 65-year-old grandfather, as saying that he had promised to buy the boy a big bike if he studied hard. When the boy did so, Mr Pokin delayed the purchase, saying he was worried by previous reports of fatal big bike accidents, but Thanakrit insisted on it.

The grandfather finally bought the bike last week, saying he did not want to disappoint his grandson, whose life had been been difficult following the divorce of his parents.

Click "play" to listen to Chiang Mai teen killed on brand-new big bike and "Download" to keep this file for educational purpose.

disappoint : to fail to satisfy someone or their hopes, desires, etc.; to cause someone to feel unhappy - ทำให้ผิดหวัง

divorce : a legal way of ending a marriage - การหย่า

insist : to say very firmly that something must happen or must be done - ยืนกราน

oncoming : coming towards you - ที่กำลังมา

surveillance camera : a camera kept in a place to record what happens there, especially criminal activity - กล้องวงจรปิดเพื่อรักษาการความปลอดภัย