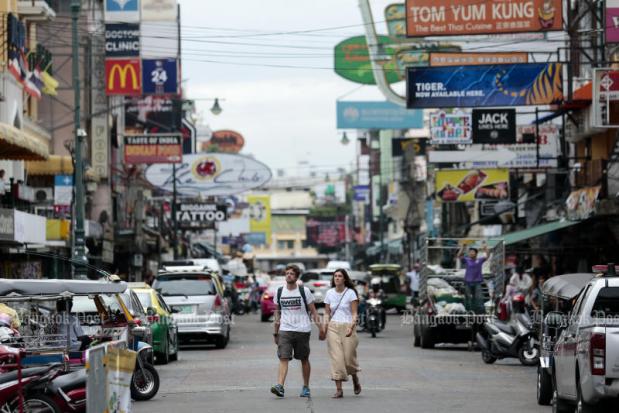 Khao San Road is one of three streets in Bangkok to become vehicle-free at times next month. (Photo by Patipat Janthong)

The Bangkok Metropolitan Administration (BMA) is planning to turn Silom, Yaowarat and Khao San roads into pedestrian-only zones on certain hours next month, to boost tourist numbers and the local economy.

Deputy Bangkok governor Sakoltee Phattiyakul said that Silom Road will be turned into a "walking street" between noon and 10pm on the third Sunday of each month. The trial period will begin on Dec 15 and will run until May next year, when it will be reviewed.

Yaowarat Road will be closed to traffic on Fridays, Saturdays and Sundays between 7pm and midnight for a three-month trial period, starting on Dec 13, he said.

"On Fridays and Saturdays, one lane in each direction [on Yaowarat Road] will be reserved for street food vendors," Mr Sakoltee said. "On Sundays, the road will be closed to traffic."

Mr Sakoltee also said that Khao San Road will be turned into a walking street on Mondays from 5pm to midnight, starting on Dec 16.

The deputy governor said that a stage will be set up in front of Chana Songkhram police station, where arts and cultural performances — such as dances, Thai boxing matches, or even cooking demonstrations — can be organised.

Mr Sakoltee said he is confident the plan will attract more tourists and make them spend more money, which in turn will boost the local economy.

Click "play" to listen to Silom, Khao San, Yaowarat roads to become 'walking streets' and "Download" to keep this file for educational purpose.

cultural (adj.): related to the customs and beliefs, art, way of life and social organization of a particular country or group - วัฒนธรรม

review : to study or examining a situation, policy, or idea again in order to decide whether it is suitable or satisfactory - ทบทวน