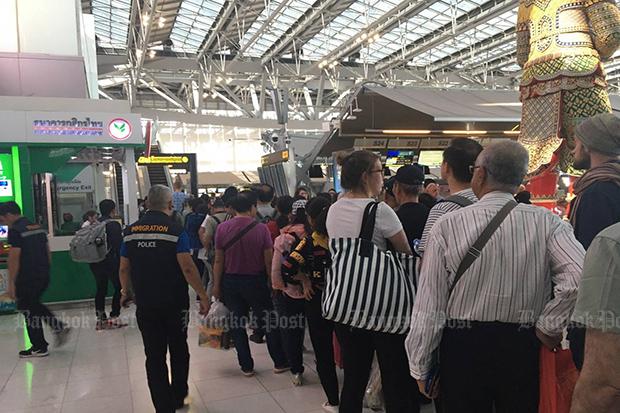 A queue of outbound passengers waiting for security screening is seen at the departure hall of Suvarnabhumi airport on Sunday. (Immigration police photo)

Immigration police were working with Airports of Thailand Plc to end a long queue of outbound passengers waiting for security clearance at Suvarnabhumi airport.

A large number of complaints and questions about the delay from outbound passengers kept waiting in the departure hall of Thailand's main gateway were received by Jor Sor 100 traffic radio around 10.30am on Sunday.

The deputy Immigration Police Bureau spokesman said that the long queue was due to the screening process conducted by the airport agency in line with instructions from the International Civil Aviation Organisation.

The immigration office at Suvarnabhumi had deployed staff at all counters to ease passenger congestion, he said, adding that the office will work with the airport agency to solve the problem.

Click "play" to listen to Passengers face long security queue at Suvarnabhumi and "Download" to keep this file for educational purpose.

deploy : to put into position and made ready for use - การนำลงประจำท้องที่

outbound (adj): travelling towards a particular point, particularly away from a city, country, etc. - ขาออก (opposite of inbound ขาเข้า)

queue : a line of people waiting for something - คิว