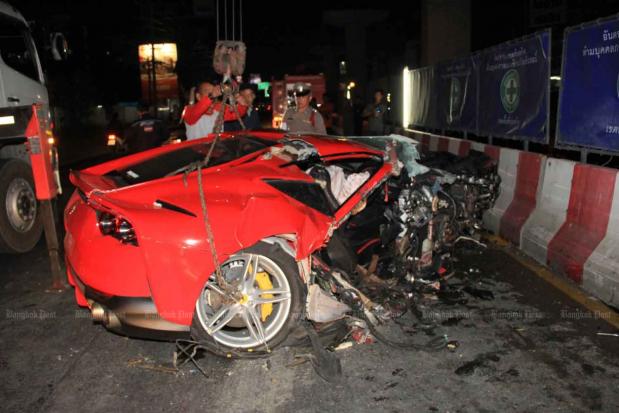 The wreckage of the crashed Ferrari, which hit a concrete barrier on Srinakarin Road in Muang district of Samut Prakan early Wednesday morning. (Photo by Sutthiwit Chayutworakan)

SAMUT PRAKAN: A 36-year-old beverage manufacturer and car racer and his actress passenger were injured when his Ferrari hit a concrete barrier on a road in Muang district early on Wednesday morning.

Police were informed of the crash on Srinakarin Road about 3.30am. The vehicle hit a barrier at a monorail construction site.

Driver Sarawut Sereetoranakul was trapped in his seat, inside the totally wrecked Ferrari, with a broken right leg. Rescue workers used the Jaws of Life to extract him. He is the managing director of JS Asia Beverage Co, and also races cars for the PSC Motorsport team.

In the passenger seat was actress Sananthachat Thanapatpisal, aka Fon Hormones, 25. She suffered only slight chest pain. They were taken to nearby Sikarin Hospital, and later referred elsewhere.

Mr Sarawut said the vehicle felt like it slid on a patch of oil, causing him to lose control, and it hit a concrete barrier in the middle of the road.

Police were investigating the accident.

Click "play" to listen to Ferrari wrecked in crash and "Download" to keep this file for educational purpose.

barrier : a bar or gate that stops people, animals or vehicles from entering a place - สิ่งกีดขวางทางผ่าน

Jaws of Life : a machine that opens damaged vehicles to free people trapped inside -

monorail (noun): a railway/railroad system in which trains travel along a track consisting of a single rail, usually one placed high above the ground - รางรถไฟรางเดียว

referral (noun): the act of sending somebody who needs professional help to a person or place that can provide it - การส่งต่อ (ผู้ป่วย)

slide (past form: slid) : to move easily over a smooth or wet surface; to make something move in this way - ลื่น