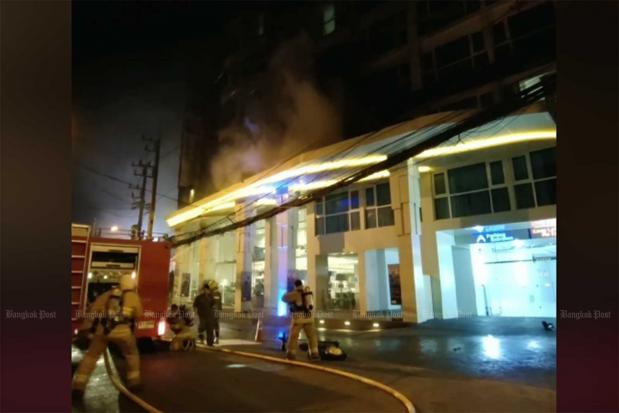 Hundreds of guests ran to safety as fire raced through a hotel in Pattaya early on Friday morning.

The fire was reported at the Holiday Inn Express on Soi Bua Khao at about 4.30am.

Three fire trucks and crews were deployed to the scene. Flames destroyed the third floor of the eight-storey hotel. As thick smoke billowed from the front of the building, more than 400 guests staying there were hurriedly evacuated - including children, elderly and disabled people.

Firemen took about 30 minutes to bring the fire under control, Thai media reported.

A security guard at the hotel said he first saw smoke coming from a room balcony on the third floor, and then flames that were quickly spread by the strong wind.

There no reports of people being injured. Damage was initially estimated at 3 milion baht or more.

Click "play" to listen to VIDEO: Hundreds flee burning Pattaya hotel and "Download" to keep this file for educational purpose.

balcony : a place where you can stand just outside an upper window. It sticks out from the wall of a building - ระเบียง

billow (noun): a moving mass or cloud of smoke, steam, etc. like a wave - คลื่นใหญ่พองออก