Teacher held for murder of twins who stole his limes | Bangkok Post: learning 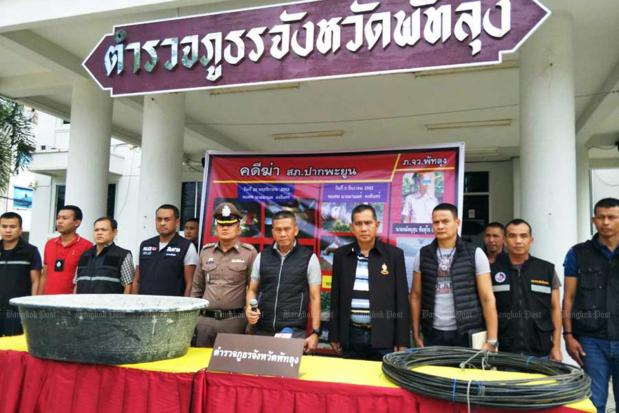 Police announce the arrest of teacher Madyusup Chaisukkho for the murder of twin brothers he said were stealing limes from his farm. (Photo by Assawin Pakkawan)

PHATTHALUNG: A 55-year-old teacher has been arrested for the murder of twin brothers who stole limes from his farm.

Police on Tuesday announced the arrest of Madyusup Chaisukkho, an English teacher, for the murder of  Manop Khongchan and his twin brother Manon, both 31.

He said thieves had been stealing limes from his farm almost every night. He laid a live electrified wire near  the ground level to stop them, never thinking that it would kill them.

When he discovered the two electrocuted bodies he became frightened. He dumped them away from the farm, hoping to hide the crime, he said, according to police.

However, investigators did not believe he acted alone, or was telling the whole story. The two brothers were big. They believed 5-6 people might have been involved. Local residents found Manop's body in a reservoir on Nov 28, about 2km from the farm. His motorcycle was also found in the reservoir. On Dec 5, the body of his younger twin Manon was found about 600 metres away.

dump (verb): to get rid of something unwanted - ทิ้ง

electrocute : to kill or injure someone with electricity - ฆ่าหรือทำร้ายด้วยกระแสไฟฟ้า

lime : a small green fruit, like a lemon, with a lot of sour juice, used in cooking and in drinks; the juice of this fruit - มะนาวพันธุ์หนึ่ง

murder (noun): the crime of intentionally killing a person - ฆาตกรรม

reservoir : a natural or artificial lake where water is stored - อ่างเก็บน้ำ

thieves : people who dishonestly take something that belongs to someone else and keep it - ขโมย

twin (adj): one of two children born at the same time to the same mother - แฝด, ฝาแฝด

wires (noun): metal in the form of thin threads - สายโลหะ