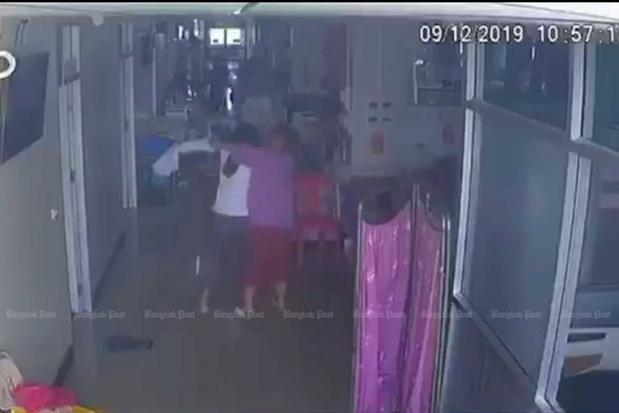 Security camera footage shows the inpatient attacking a doctor at a hospital in Khon Kaen province on Monday. (Photo supplied)

A patient tried to stab a young doctor in the neck with a pair of scissors, accusing her of slow service, at a public hospital in Khon Kaen.

The 25-year-old doctor, who asked not to be identified, told reporters the incident happened while she was examining patients on Monday morning.

She said the patient first complained loudly that she was moving too slowly in examining patients. Security guards took the woman back to her bed, calmed her down and left.

The doctor said when she approached the complainer's bed, the patient got up, locked an arm around her neck and tried to stab her with a pair of scissors.

She managed to block the scissors with her metal folder, fending off repeated attempts to stab her about the neck.

"With such slow examination, we're better off dying together," the doctor quoted the woman as saying while trying to stab her.

Nurses, guards and a relative of the patient rushed to overpower the woman, who was then sedated. The relative apologised.

The doctor said she had treated the patient a few times previously for allergies. A psychiatric examination indicated she was not mentally ill.

The hospital's legal representative has filed a complaint with local police.

allergy : a medical condition in which you become sick or your skin becomes covered with red marks as a reaction to something you eat, breathe or touch - อาการแพ้  ภูมิแพ้

block : to stop someone/ something from moving through or along something else - ปิดกั้น, กีดขวาง

calm down : to become or make somebody become quiet and more relaxed after strong emotion or excitement - ทำให้สงบ, ทำให้นิ่งเฉย

complain : to say that you are annoyed, unhappy or not satisfied about somebody/something - บ่น, ร้องทุกข์

psychiatric : connected with the treatment of mental illness - เกี่ยวกับจิตวิทยา

sedate : to quiet someone usually by giving them a drug - ทำให้เงียบ

stab : to kill or hurt someone by pushing a knife or other sharp object into their body - แทงด้วยอาวุธ