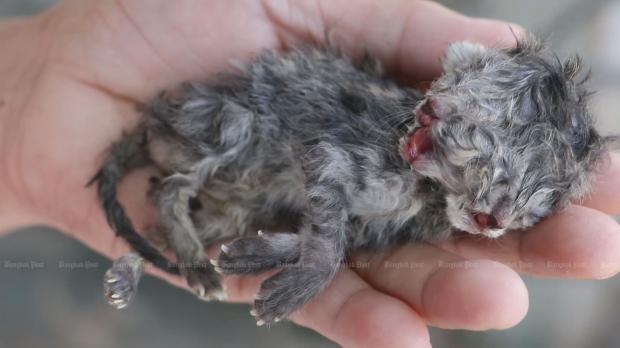 The two-headed baby cat on the palm of its owner in Ratchaburi province. (photo by Saichon Srinuanchan)

RATCHABURI: A Persian cat has given birth to a rare two-headed kitten and her owner is determined to keep it alive as long as possible.

Chabaprai Nilpet, 52, said the mother cat gave birth to a normal kitten on Monday, but appeared to have difficulty delivering more.

She took it to a clinic where the veterinarian performed a caesarian, delivering two more kittens - and to the surprise of everyone, one of them had two heads.

The rare kitten was having trouble breathing, so the vet stimulated its lungs and it got stronger.

Back home, Mrs Chabaprai said she used a syringe to feed the odd-but-lovable kitten, because it could not suck milk directly from its mother.

"I named the left head Thong (gold) and the right one Ngern (silver). I will give it the best care so that it can live as long as possible, because I have never seen such a rare cat," she said.

Click "play" to listen to Ratchaburi cat has two-headed kitten and "Download" to keep this file for educational purpose.

caesarian : an operation where a baby is taken from its mother by cutting open the abdomen -

deliver (verb): to help a woman to give birth to a baby - ช่วยทำคลอด

lungs : the organs in your chest that fill with air when you breathe - ปอด

stimulate : to make something develop or become more active; to encourage something - กระตุ้น, ส่งเสริม

syringe : a hollow cylindrical piece of equipment which is used for sucking liquid out of, or pushing liquid into something, especially one with a needle - หลอดดูดยา