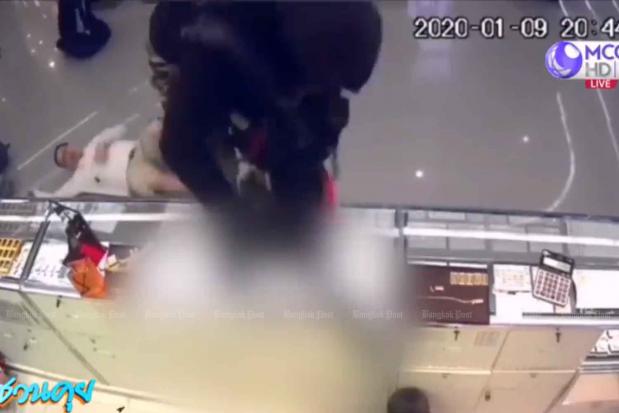 A screenshot from Mcot TV shows the robber on the counter of the gold shop in Robinson department store in Muang district, Lop Buri, on Thursday night.

Police are hunting a gold-shop robber who killed three people, including a young boy, and wounded four others in the Robinson department store complex in Lop Buri on Thursday night.

The man robbed the Aurora gold shop inside the mall about 8.44pm.

He was wearing a woollen balaclava, black shirt and camouflage trousers, and carrying a handgun with a long sound suppressor attached to it.

As he approached he fired at shop staff and customers, then jumped across the counter and snatched three trays of gold necklaces worth about 500,000 baht. As he left he shot a security guard dead before fleeing on a red-white Yamaha Fino motorcycle without a licence plate.

Three people died of their bullet wounds, including a two-year old boy shot in the head while walking past the gold shop with his mother. The boy succumbed to the wound at a local hospital.

Police said the man used a 9mm pistol. Security camera footage showed that the robber arrived at the store alone.

"I wonder what state his mind was in. A woman died. A child died. You wanted gold. But why must people be killed? I cannot imagine such a cruel mind. I ask people to help find him... It was appalling," police commissioner Pol Lt Gen Amphol said.

Senior officers were handling the case and armed police commandos were being used in the hunt, he said. They would do their very best to catch him.

approach : to move closer to someone or something - เข้าใกล้

balaclava : a warm hat that covers your head, neck, and usually all of your face except your eyes; a closely fitting covering for the head and neck, usually made from wool - หมวกที่คลุมหัว คอ ยกเว้นหน้า

camouflage (adj): a way of hiding soldiers and military equipment, using paint, leaves or nets, so that they look like part of their surroundings - การอำพรางตัวให้เข้ากับธรรมชาติเพื่อการหลบซ่อน

licence plate : a flat piece of metal or plastic on the front and back of a vehicle that shows its license number - แผ่นป้ายทะเบียนรถยนต์

suppressor (noun): a thing or person that prevents something from growing, developing or continuing - เครื่องห้าม, เครื่องระงับ