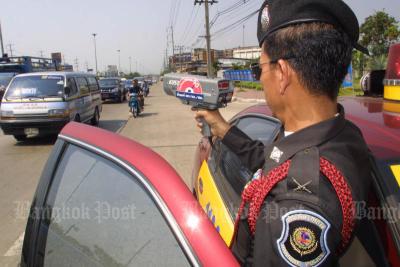 The Transport Ministry is looking at raising the speed limit for the outside lane of major roads to at least 90km per hour, according to minister Saksayam Chidchob.

The increase is being studied for carriageways with four lanes or more. Currently, the speed limit on such roads, mostly in cities, is capped at 80km per hour.

Mr Saksayam said a similar study will be launched for a speed limit increase on the country's main inter-provincial highways -- Phahon Yothin, Mitraparb, Sukhumvit and Phetkasem. The new limit being mulled for these roads is 120kph.

However, traffic and highway laws will need to be amended before such limits can be approved and enforced, he said.

The Highways Department studies are expected to be presented to the Commission for the Management of Land Traffic chaired by Deputy Prime Minister Prawit Wongsuwon for consideration next month.

If the commission approves the studies, a ministerial regulation governing the new speed limits under the Traffic Act will be enforced.

Once the new limits are put in place, slow drivers who use these lanes will face legal penalties on par with speeding offenders. The punishments will include demerit points, according to the transport minister.

However, the ministry said only certain sections of inter-provincial highways, spanning a total of 252km, are currently suitable for a higher limit.

Road signs would have to be changed and roadside features improved before implementing the plan.

A Highways Department source said the move was needed to reduce the risks caused by slow-moving vehicles hogging the fast lane. This prompts other motorists to change lanes and under-take them, which raises the risk of accidents, according to the source.

The new limit would also lower the chances of sideswiping or rear-ending, he said.

Sudden lane changes cause about 30% of traffic accidents annually, according to department figures.

Click "play" to listen to Speed limit hike 'to cut crashes' and "Download" to keep this file for educational purpose.

amend : to make changes to a document, law, agreement, etc. especially in order to improve it - การแก้ไขกฎหมาย

demerit : a fault in something or a disadvantage of something -

hogging : being a pig or "hog", taking everything and not leaving anything for anyone else -

implement : to make something such as an idea, plan, system or law start to work and be used - นำแผนหรือนโยบายมาปฏิบัติ, นำมาใช้

mull : to think carefully about something over a period of time - ครุ่นคิด

penalty : a punishment, or the usual punishment, for doing something that is against a law - โทษ

rear-ended : hit from behind -