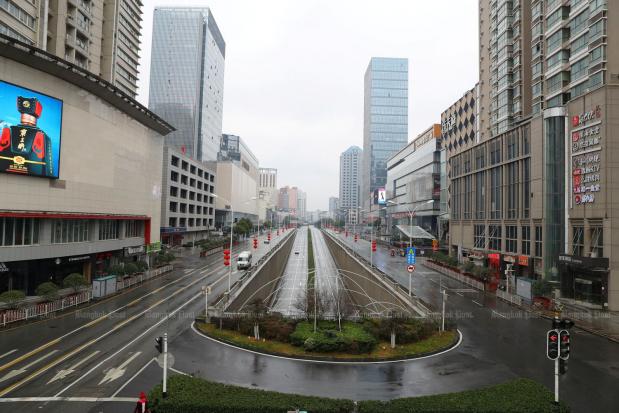 Street view after Wuhan government announced to ban non-essential vehicles in downtown area to contain coronavirus outbreak, on the second day of the Chinese Lunar New Year, in Wuhan, Hubei province, on Sunday. (cnsphoto via Reuters)

SHANGHAI: More than 2,000 people have been infected with a new coronavirus, mostly in China where 56 people have died from it.

Chinese President Xi Jinping said on Saturday that China was facing a "grave situation", as health authorities around the world scrambled to prevent a pandemic.

The coronavirus transmission ability is getting stronger and infections could continue to rise, China's National Health Commission said on Sunday.

The virus, believed to have originated late last year in a seafood market in the central Chinese city of Wuhan that was illegally selling wildlife, has spread to Chinese cities including Beijing and Shanghai, as well as the US, Thailand, South Korea, Japan, Australia, France and Canada.

On Sunday, China announced a nationwide ban on the sale of wildlife in markets, restaurants, and e-commerce platforms. Wild animals packed together in Chinese markets are blamed as places for viruses to evolve and jump to humans.

The outbreak has prompted widening curbs on movements within China, with Wuhan, a city of 11 million, on virtual lockdown, with transport stopped except for emergency vehicles.

Click "play" to listen to Coronavirus deaths hit 56 and "Download" to keep this file for educational purpose.

blame : to be responsible for something bad - เหตุขัดข้อง

scramble : to do something in a hurry - รีบเร่ง

scrapped : decided not to continue with something, such as a plan or event - ยุติแผนที่วางไว้

wildlife : animals, birds, insects, etc. that are wild and live in a natural environment - สัตว์ป่า