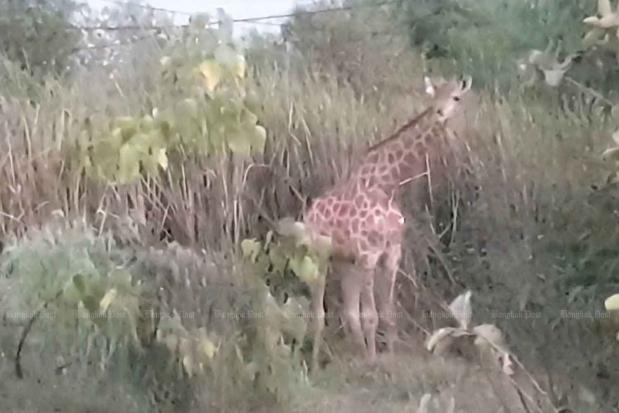 One of the two giraffes that broke loose from a container truck is spotted in bushes beside Highway 304 in Chachoengsao's Bang Khla districts on Tuesday afternoon. (Photo by Sonthanaporn Inchan)

CHACHOENGSAO: The search was continuing for a giraffe that escaped from one of many containers loaded with zoo animals being transported by trucks from Suvarnabhumi airport.

On Tuesday, the convoy of 24 trucks with the animals in containers departed from Suvarnabhumi airport  about 4pm. The destination was an animal breeding station in Prachin Buri.

One of the trucks was carrying a container with three giraffes.

Monthon Mongphet, the driver, said that about 5.30pm, as the truck was moving slowly along the highway, he saw two giraffes, one about 4 metres tall and the other 5-6 metres tall, running off into the roadside bushes.

He stopped and found out the door of the container was open. It had apparently not been properly locked, allowing the two giraffes to get out, Mr Monthon said.

About 6pm, people driving along Highway 304 spotted two giraffes in bushes near the Bang Khla intersection.

A team rushed to where the giraffes were seen. They recaptured the 4-metre giraffe with a tranquilising shot. There was no sign of the other giraffe.

Click "play" to listen to Giraffe escapes from truck and "Download" to keep this file for educational purpose.

bush : a plant that is smaller than a tree and has a lot of thin branches growing close together - พุ่มไม้

giraffe (noun): a tall African animal with a very long neck, long legs, and dark marks on its coat - ยีราฟ

tranquilise (verb): to make a person or an animal calm or unconscious, especially by giving them a drug - ทำให้สงบ, ระงับประสาท